Gord and I attended Haunted High Park, presented by Colborne Lodge and Toronto's Historic Sites (operated by the City of Toronto).  It was being done over nine nights, two performances a night.  There are a couple nights left but they are sold out.

Join an event that combines a theatrical séance followed by a candlelit tour of a 19th-century home in mourning and a visit to the tomb of John and Jemima Howard, the founders of High Park. The evening explores Victorian ideas about death, dying and the afterlife as well as ghost sightings and other paranormal activities in and around the museum.

Guests witnesses a theatrical recreation of a Victorian séance, complete with the trickery, sleight of hand and showmanship that enabled spiritualists to contact the departed. This event is part of Toronto History Museums' Halloween programming.

John George Howard was an architect, engineer, and prominent Toronto citizen originally from England.  In 1836, he purchased 160 acres to the west of Toronto and built his country cottage, Colborne Lodge, and eventually moved there permanently.  In 1873, Howard bequeathed the property to the City of Toronto as an urban park.  There were several conditions including that he and his wife, Jemima, could continue to live at their residence, no alcohol ever be served in the park (still true to this day) and that the city hold the park "for the free use, benefit and enjoyment of the Citizens of Toronto for ever and to be called and designated at all times thereafter High Park".  Eventually more land was purchased by the City to be added to High Park (it's now 398 acres). 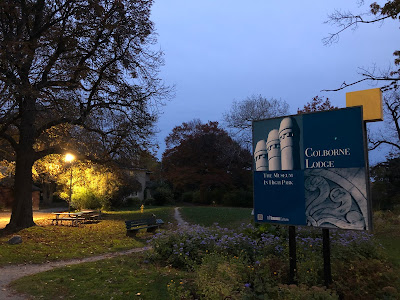 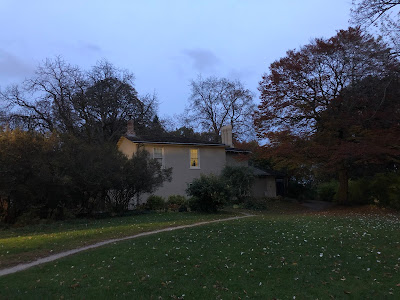 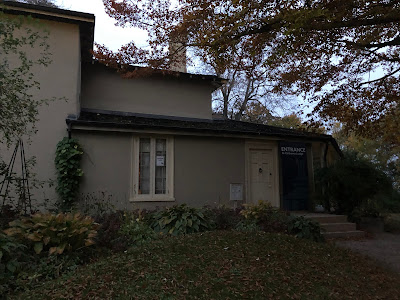 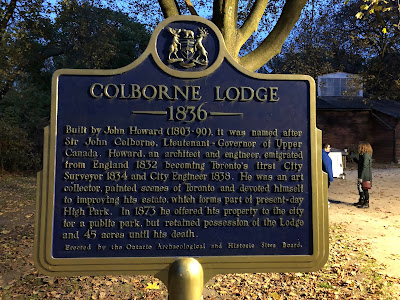 The séance was held in what seems like a coach house next to Colborne Lodge. 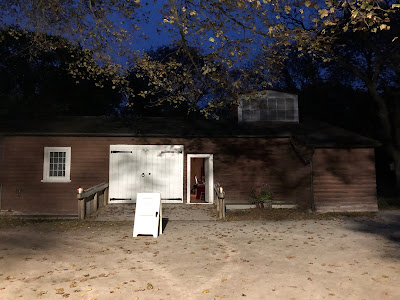 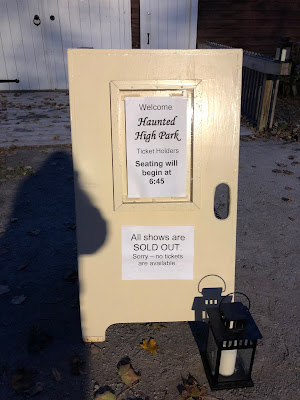 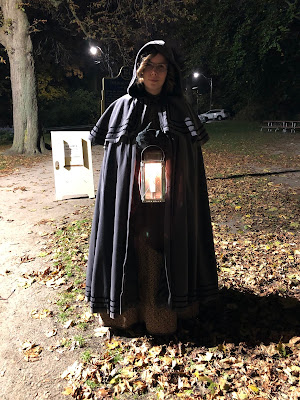 The séance was performed by Eldritch Theatre.  I didn't know what to expect but I hoped it wasn't going to be scary ... I don't like to be scared.  Doc Wuthergloom led the séance, which was extremely interactive with a combination of magic, illusions, possibly mind reading and a lot of humour.  At one point, Doc asked three volunteers to write a question on a piece of paper that would be answered by the "spirit" with a "yes" or "no" and Doc didn't look at the questions.  I was one of the volunteers and my question was "Is Gord's book going to be a bestseller?"  Doc asked the spirit the questions, even though he hadn't seen them, and he got them exactly right, including mine.  The spirit's response to my question was "maybe".   The séance was very entertaining and I'm going to keep an eye out for other Eldridge Theatre productions. 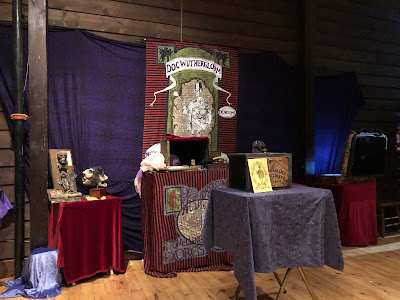 After the séance, we were taken on a candle lit tour of Colborne Lodge and its grounds, including John and Jemima Howard's grave.  Our pal, Richard Fiennes-Clinton, of Muddy York Tours was our guide.  I've done quite of few tours with Richard over the years and he has a wealth of knowledge about the history of Toronto.  I always learn something new!  Tonight he recreated what it would have been like to be at John Howard's funeral and told us stories.  We toured the main level of the house and Richard took us to John and Jemima's bedrooms upstairs, which I've never been in. 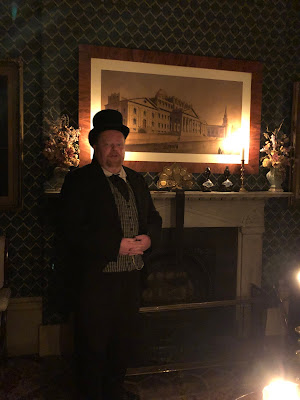 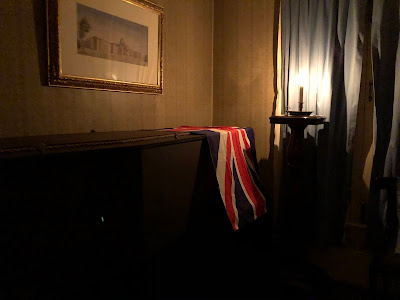 Then Richard took us to John and Jemima's grave, inside the fenced enclosure, which I've never been in.  It was dark and rainy ... great setting for a haunted walk! 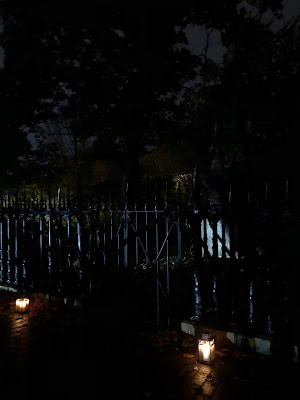 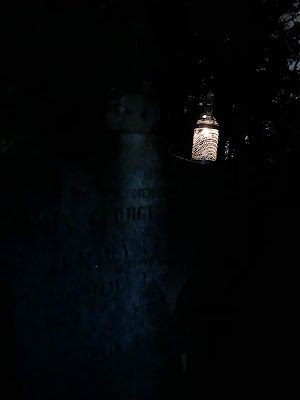 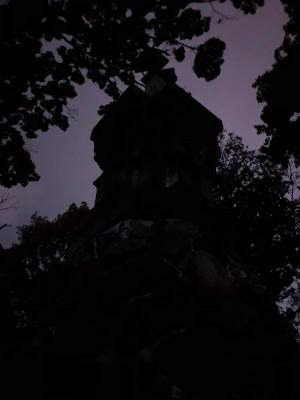 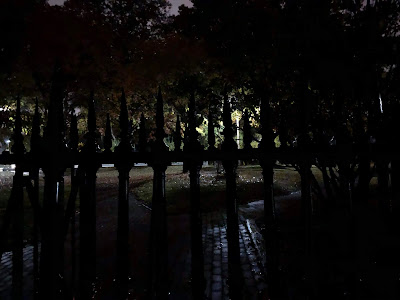 Richard took us back to the kitchen in the house and served us warm apple cider and cookies and told us some more stories. 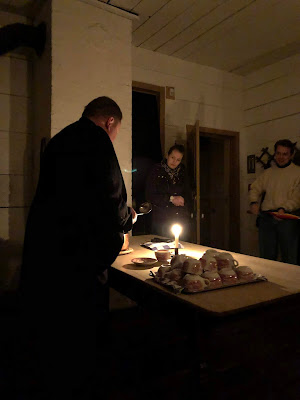 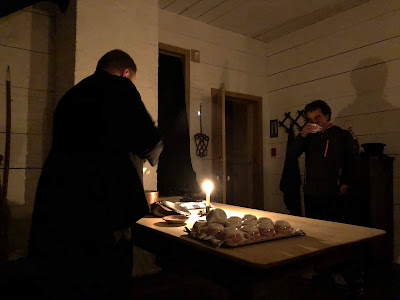 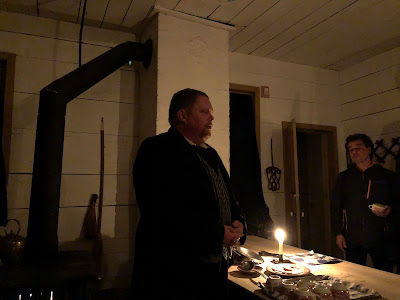 After the event was over, we chatted a bit with Richard and Lauren, a museum employee.


It was a fun fun evening and I look forward to doing it again next year!
By Teena in Toronto at 9:00 pm
Email ThisBlogThis!Share to TwitterShare to FacebookShare to Pinterest
Label(s): Live theatre