I arrived in Kitchener this evening and I'm here 'til Friday (I'm here for a conference).

I felt like hitting a pub for supper so went to Bobby O'Brien's Irish Pub, which is a couple blocks from my hotel.  Gord and I had been here in July 2010 and enjoyed it. 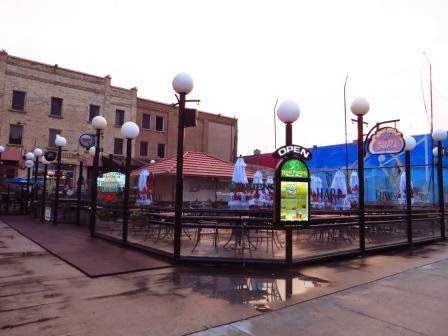 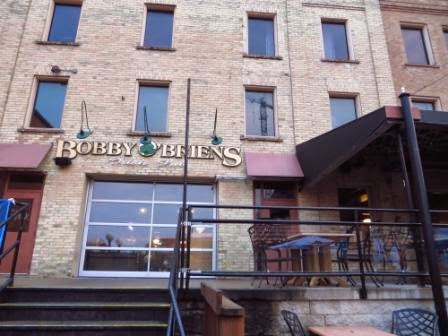 I ordered garlic bread with cheese and wings with Frank's Buffalo. 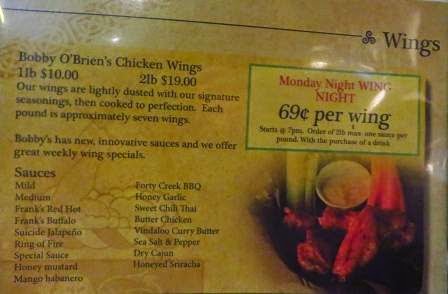 It was fairly quiet when I got there just before 7pm.

Gord and I love popcorn!

I don't like peanut butter on its own (though Gord loves it!).  But for some reason I like Reese Peanut Butter Cups and peanut butter cookies are my fav!

When I was asked to sample some Chocolate Peanut Butter Drizzlecorn from Popcorn, Indiana, of course, I didn't say no!  A big bag arrived today. 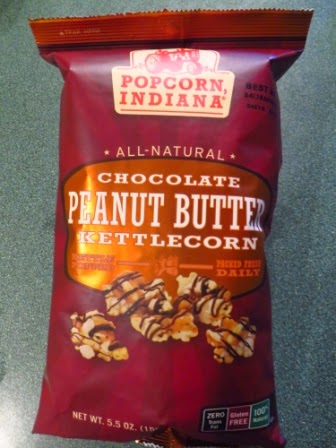 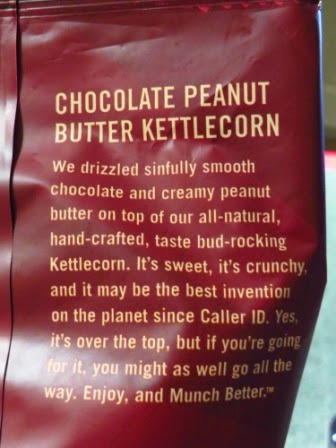 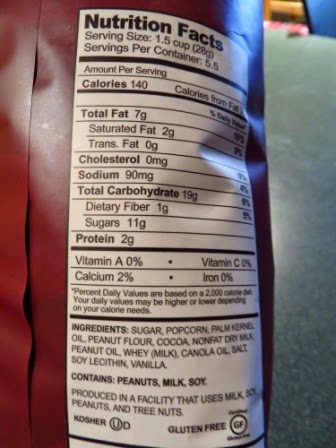 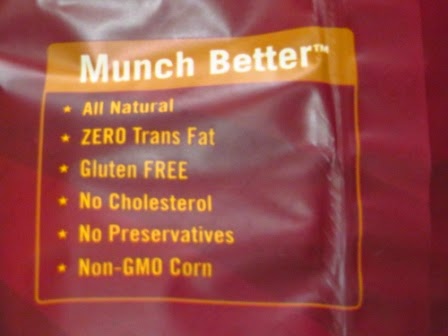 And yes, it is "drizzled" with chocolate and peanut butter just as its name says. 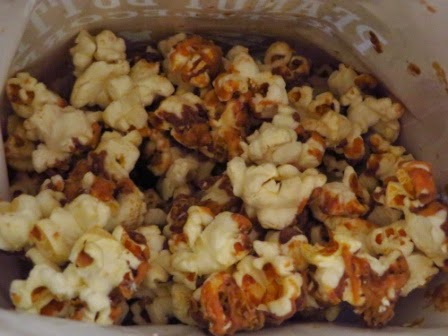 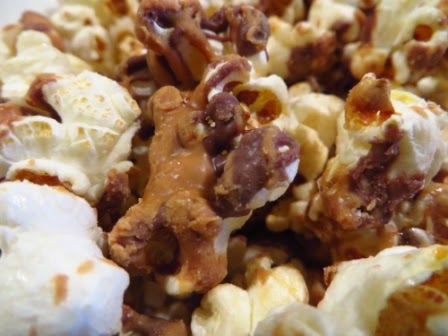 And it's good ... really good!  The chocolate is really rich and the peanut butter is not overwhelming.

National Popcorn Poppin’ Month is in October and Peanut Butter Lover’s Month is in November ... so this is the perfect snack to celebrate!

It is available at major grocery and mass retailers where finer snacking choices are offered, at a suggested retail price of $3.99 - $4.99.


By Teena in Toronto at 4:27 pm 5 comments:
Email ThisBlogThis!Share to TwitterShare to FacebookShare to Pinterest 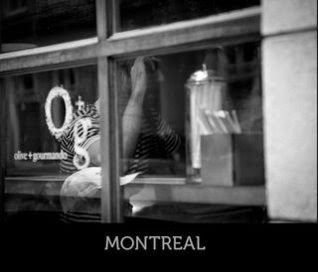 From Goodreads ~ Montreal as seen through the eyes of a street photographer.

These unusual images show Montreal and Montrealers from an entirely different perspective. Debra Schoenberger aka "girl with camera" has lived in Montreal since 1979.

The company I work for has its head office in Montreal so I go there a couple times a year.  Plus I like taking pictures.  So I was curious to see what Montreal looked like through the eyes of a photographer.

The pictures are not your usual touristy shots ... here are some samples of the author's work:


You should check out this book if you want to see Montreal through different eyes.

By Teena in Toronto at 12:01 am 1 comment:
Email ThisBlogThis!Share to TwitterShare to FacebookShare to Pinterest
Label(s): Books, Books - 2014, Canadian, Canadian 2014, Debra Schoenberger, Published 2014

Book ~ "Of All the Gin Joints: Stumbling through Hollywood History" (2014) Mark Bailey 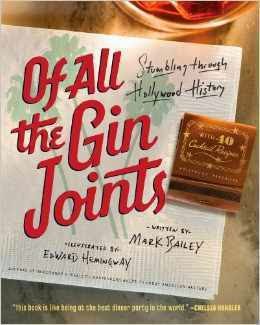 From Goodreads ~ True tales of celebrity hijinks are served up with an equal measure of Hollywood history, movie-star mayhem, and a frothy mix of forty cocktail recipes.

From the frontier days of silent film up to the wild auteur period of the 1970s, Mark Bailey has pillaged the vaults of Hollywood history and lore to dig up the true - and often surprising - stories of seventy of our most beloved actors, directors and screenwriters at their most soused.

I like reading gossip about famous people ... and that's why I was attracted to this book.  It's stories about actors, directors, writers, etc. and their drinking habits.

It's divided into four parts:

Here are some of the stories:

In addition to the stories, there is history of the places these celebrities drank in such as the Brown Derby, the Hollywood Athletic Club, Mocambo, Musso & Frank Grill (open), Whisky a Go Go (open), Trader Vic's (open) and Chateau Marmont (open).

If the star had a favourite cocktail, the recipe is included such as Mimosas, Half and Half, Orange Blossom, Martini, Prairie Oyster, Tom Collins, Zombie, etc.

Films with crazy booze-soaked stories like Apocalypse Now, From Here to Eternity and The Misfits, are featured.

Also included are some quotes ... here are some I found funny:

I enjoyed this book.  I liked the writing style ... the stories were short and snappy and focused.  At times, the author was sarcastic, which I enjoyed.  As a head's up, there is swearing.

It was a crazy look at the lives of these celebrities ... it's amazing the amount of liquor they consumed, what they did and what they got away with.  It seemed like everyone was drinking with everyone and they were all sleeping with each other.  It would be interesting to see how much (if anything) has changed with celebrities today.

I'd heard of most of the celebrities in the book but I was still often driven to Google them to get more information about them.
By Teena in Toronto at 4:57 pm 1 comment:
Email ThisBlogThis!Share to TwitterShare to FacebookShare to Pinterest
Label(s): Books, Books - 2014, Mark Bailey, Published 2014

"Freda and Jem's Best of the Week", Buddies in Bad Times Theatre, Toronto, ON

Tonight Gord and I saw Freda and Jem's Best of the Week at Buddies in Bad Times Theatre. 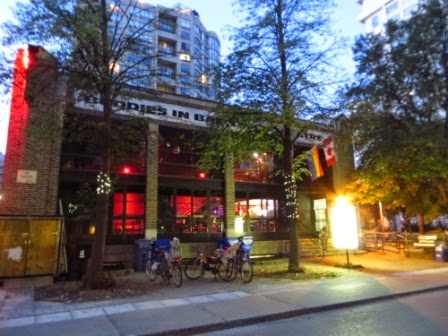 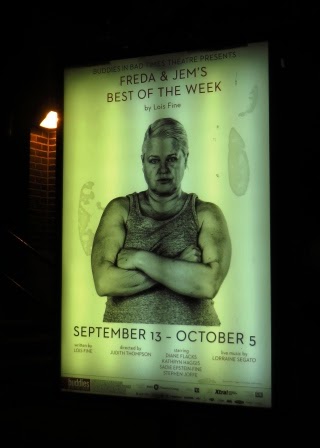 Freda and Jem are two women who fell in love, had kids and built a family together. When they decide to split up, their family discovers that their love for each other doesn’t have to end at divorce – but it will have to change. A heartwarming story about family making and family breaking.

I'd read about it in BlogTO last week and it sounded good.  Plus I'd volunteered at my local YMCA back in the 1990s and we had to go through a three month training course. Kathryn Haggis, one of the actresses in the play, was in the course with me.  We've since lost touch but I'm happy to see that she is still working as an actress (she is in Dr. Cabbie, which just came out last week, and My Big Fat Greek Wedding among other things).

Jem (Kathyrn Haggis) meets Freda (Diane Flacks) and they fall in love.  About twenty years and two kids later (Sadie Epstein-Fine and Stephen Joffe) later, they are breaking up.  No one is happy about it but the fighting has to stop.

It's a cozy small theatre.  The set was very minimal ... just a raised platform which becomes a bed, a table, etc.

It was a good story and the actors did a excellent job.  It was funny in parts yet sad in others.  The actors were believable in showing the pain when a family breaks up.   It bounced back and forth from today to the past in flashbacks and it was quite easy to determine where they were.

Lorraine Segato of the Parachute Club accompanied the actors with songs during the play.  I was wondering how it was going to work and I didn't find it intrusive.

I'd recommend this play.
By Teena in Toronto at 9:20 pm 1 comment:
Email ThisBlogThis!Share to TwitterShare to FacebookShare to Pinterest
Label(s): Live theatre

Gord and I saw Freda and Jem's Best of the Week at Buddies in Bad Times Theatre this evening and had supper at Duke's beforehand.  Duke's just opened in December and we've been wanting to check it out. 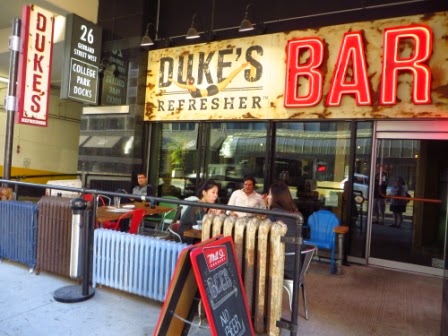 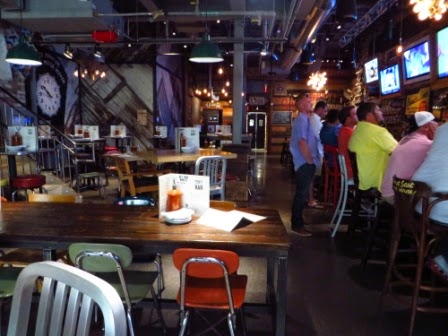 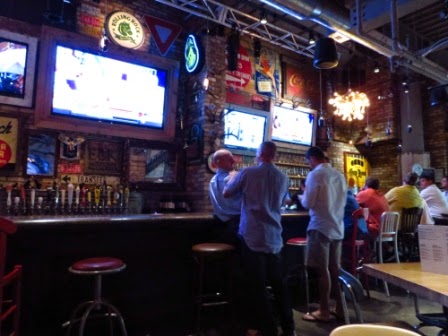 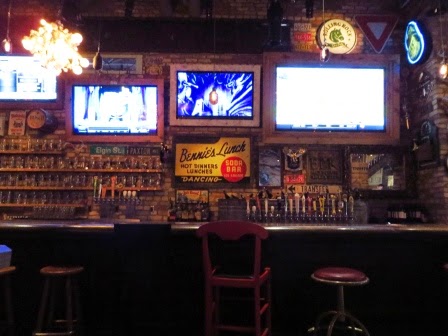 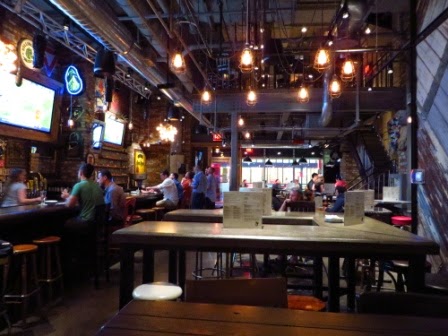 Read more »
By Teena in Toronto at 7:15 pm 1 comment:
Email ThisBlogThis!Share to TwitterShare to FacebookShare to Pinterest
Label(s): Duke's Refresher and Bar Toronto ON (Yonge Street)

Gord and I had some errands to run and stopped at the Skyline Restaurant in Parkdale (Queen W/Lansdowne) for breakfast first.  We'd had a good burger there a couple years ago. 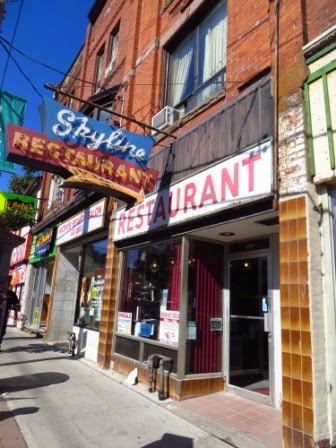 The restaurant has been around for a number of years. 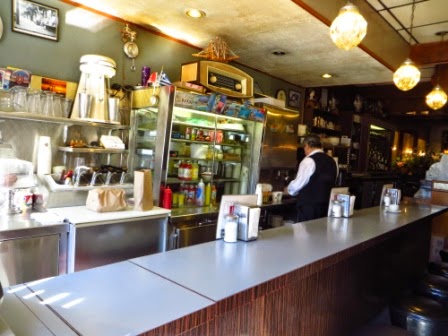 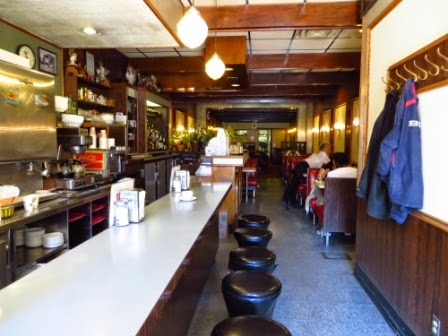 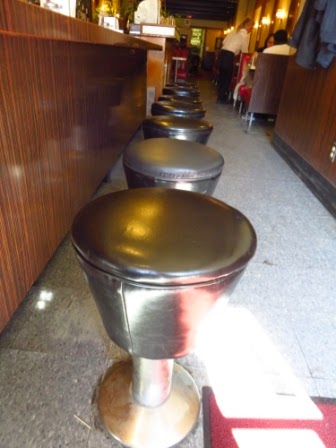 Here's the view from our booth ...

Read more »
By Teena in Toronto at 11:30 am 2 comments:
Email ThisBlogThis!Share to TwitterShare to FacebookShare to Pinterest
Label(s): Skyline Restaurant Toronto ON

My pal, LeeAnn, gave me a pass for two to see Hector and the Search for Happiness tonight (it opens tomorrow).  My pal, Trish, went with me.

Before the movie, we met at Burrito Boyz (John/Adelaide W) for supper ... it's where we always meet before we see a movie. 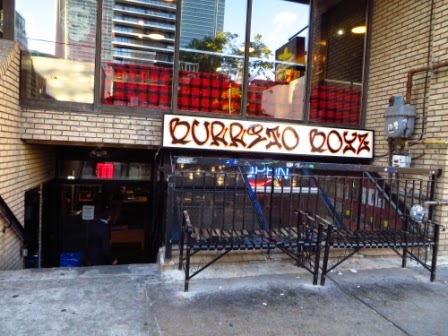 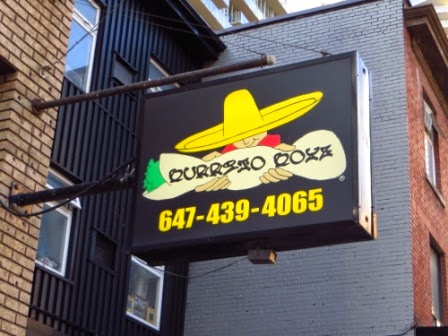 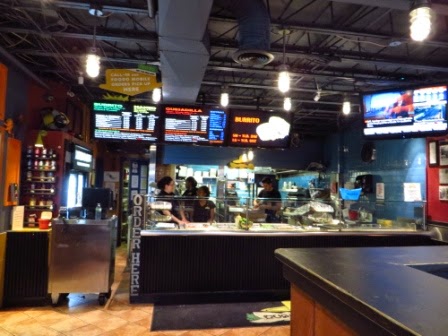 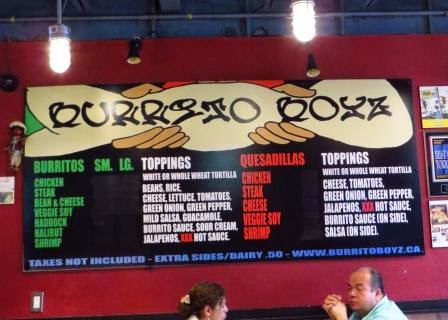 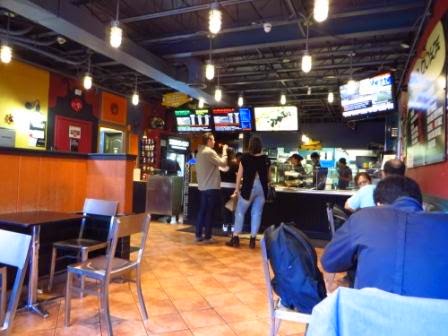 Trish is vegan and ordered hers with ground soy and no dairy. 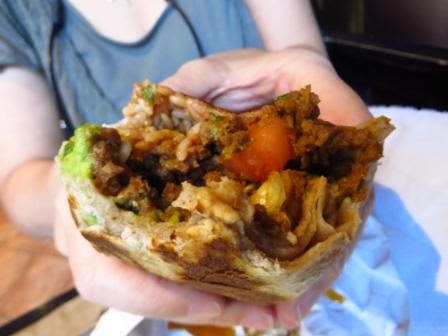 I ordered what I always do ... a chicken burrito.

Hector is a quirky psychiatrist who has become increasingly tired of his humdrum life. As he tells his girlfriend, Clara, he feels like a fraud: he hasn’t really tasted life, and yet he’s offering advice to patients who are just not getting any happier. So Hector decides to break out of his deluded and routine driven life. Armed with buckets of courage and child-like curiosity, he embarks on a global quest in hopes of uncovering the elusive secret formula for true happiness. And so begins a larger than life adventure with riotously funny results.

It was a nice movie and makes you think about your life.  Simon Pegg was Hector ... it was a different kind of role for him and I think he handled it well.  During Hector's travels, he keeps tracks of the happiness rules as he comes across them.  A couple of my favourites are:

I would recommend this movie.

By Teena in Toronto at 9:15 pm 1 comment:
Email ThisBlogThis!Share to TwitterShare to FacebookShare to Pinterest
Label(s): Burrito Boyz Toronto ON (Adelaide W)

I've been seeing Tara, a naturopath, for the last couple months ... my lower back and right knee have been bugging me so she's been doing acupuncture (I saw her this evening and she used 31 needles!).  I find it's been helping ... yay!

I'd heard about a blood test that could be done to test for food reactions, which are food sensitivities rather than food allergies. I was curious to see if I had any.

A food sensitivity is a delayed reaction that occurs hours to days after the food is consumed. When a reactive food is consumed, the antibody forms a complex with the food antigen. Normally, the body is able to eliminate these antibody-antigen complexes but with excess antigen, small complexes tend to deposit in blood vessel walls where they can cause tissue injury via the release of inflammatory mediators.  Over time, this tissue injury may contribute to the development of a variety of health conditions. Research has shown that elimination of reactive foods from the diet improves both irritable bowel syndrome and migraine headaches.  Eliminating reactive foods has also been reported to help with eczema, mood disturbances, weight gain, and other digestive disturbances.

I got the results last week and Tara and I talked about it tonight.


Have you done such a test before?
By Teena in Toronto at 7:00 pm 2 comments:
Email ThisBlogThis!Share to TwitterShare to FacebookShare to Pinterest
Newer Posts Older Posts Home
Subscribe to: Posts (Atom)
Click here to contact me.