Happy third anniversary to my sister, Sarah, and her husband, Joey. They live in Halifax, NS, with their two cats (Precious and Maggie) and gerbil (Lacey).
By Teena in Toronto at 12:01 am No comments:
Email ThisBlogThis!Share to TwitterShare to FacebookShare to Pinterest 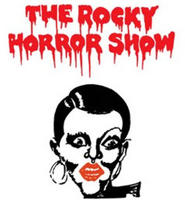 It's the story of an ordinary couple and one unforgettable night at the castle of Dr. Frank-N-Furter, a mad-scientist from the planet Transexual. Brad and Janet have arrived on their special night, the night of Dr. Furter's "beautiful creature", Rocky, the adonis humanoid created for the release of Frank's "tension", was to be born.

This show was fabulous! I love the movie and was looking forward to seeing the play. Since it is at Stage West, I was concerned that it would be a very toned down version of the movie. We go to Stage West for the Sunday brunch show and there's mostly an older crowd.

This show is very sexual and raunchy. I was amazed that the older folks weren't running for the doors during the intermission. At one point in the show, Dr. Frankenfurter goes into the audience, sits on an old dude's lap and gives him a couple big kisses on the forehead. Rather than wipe the lipstick off, the old dude wore it proudly and that's how he left the theatre! There were a couple people participating (doing the talkbacks, dancing the Time Warp, etc.) .

I'd definitely recommend this play!
By Teena in Toronto at 3:44 pm No comments:
Email ThisBlogThis!Share to TwitterShare to FacebookShare to Pinterest
Label(s): Live theatre, Live theatre: Stage West

From Amazon.ca ~ Twenty-three-year-old Eve Vitali isn't exactly where she wants to be. Though she works in New York, she's still living at home with her family in New Jersey. Her job at Bicycle Boy, a trendy magazine, is far from exciting. When her college roommate, Roseanne, calls to tell Eve she's moving to New York, Eve solves her housing problem by deciding to share an apartment with her. Her best friend, Tabitha, clashes with Roseanne at first, but then the two gradually begin to accept each other. At work, Eve catches the eye of handsome Rob King, who's been called in to reorganize the company that owns Bicycle Boy. Eve and Rob start hooking up, but Eve's dissatisfaction with her job and the lack of opportunities for advancement cause her to start thinking about her original dream to start a magazine of her own.

Fun and enjoyable read.
By Teena in Toronto at 3:18 pm No comments:
Email ThisBlogThis!Share to TwitterShare to FacebookShare to Pinterest
Label(s): Ariella Papa, Books, Books - 2005, Published 2002

From Amazon.com ~ The story of Ruby Capote, a columnist who makes a move from Boston to New York to escape her nice but imperfect boyfriend, Doug. Ruby gets a job at the New York News writing a column that chronicles the lives of her gal pals, who get together every week to play poker. Her boss, Michael, enjoys her column but he pushes her to dig deeper, to stop skimming the surface and actually analyze her own life. Ruby is falling fast for Michael, and he seems to reciprocate, but Ruby's standoffishness makes it impossible for the two to have a normal relationship. When Michael tells Ruby about a surprising detail from his past, the revelation sends Ruby running. As her friends begin to find their paths in life, Ruby wonders what it will take to find hers.

This is a quick fun read. The chapters are quite short - sometimes less than a page. The writing is humourous and Ruby gets into many funny adventures.
By Teena in Toronto at 8:51 pm No comments:
Email ThisBlogThis!Share to TwitterShare to FacebookShare to Pinterest
Label(s): Books, Books - 2005, Jill Davis, Published 2004

From Goodreads ~ In "Autobiography of a Fat Bride", Laurie Notaro tries painfully to make the transition from all-night partier and bar-stool regular to mortgagee with plumbing problems and no air-conditioning. Laurie finds grown-up life just as harrowing as her reckless youth, as she meets Mr. Right, moves in, settles down, and crosses the toe-stubbing threshold of matrimony.

From her mother's grade-school warning to avoid kids in tie-dyed shirts because their hippie parents spent their food money on drugs and art supplies; to her night-before-the-wedding panic over whether her religion is the one where you step on the glass; to her unfortunate overpreparation for the mandatory drug-screening urine test at work; to her audition as a Playboy centerfold as research for a newspaper story, "Autobiography of a Fat Bride" has the same zits-and-all candor and outrageous humor that made "Idiot Girls" an instant cult phenomenon.

"In Autobiography of a Fat Bride", Laurie contemplates family, home improvement, and the horrible tyrannies of cosmetic saleswomen. She finds that life doesn't necessarily get any easier as you get older. But it does get funnier.

Very funny book! The chapters are short and are short rants about various things. Looking forward to reading more of her stuff.
By Teena in Toronto at 3:11 pm No comments:
Email ThisBlogThis!Share to TwitterShare to FacebookShare to Pinterest
Label(s): Books, Books - 2005, Laurie Notaro, Published 2003

From Amazon.com ~ When Gillian hears her biological clock ticking, she is inseminated. Gillian switches places with her twin, a media escort, and chauffeurs astronaut, Chief Hart, around town. It turns out to be a fatal attraction and suspicion falls on Chief when Gillian's mutilated body is found the next day. The dead woman's boyfriend, Jem Hennings, has a vested interest in focusing police efforts on Hart but Melina has her own reasons for thinking him wrong. Jem's connection with a charismatic preacher known as Brother Gabriel is at the heart of this mildly creepy mystery, in which Melina tracks Brother Gabriel to his lair and uncovers his plot while simultaneously revealing her own dark secret.

I read this book a couple years ago so knew how it was going to end but I still enjoyed it again. There's lot of action, interesting characters and a good mystery. I like Sandra Brown's mystery novels - her romances not so much.
By Teena in Toronto at 10:18 pm No comments:
Email ThisBlogThis!Share to TwitterShare to FacebookShare to Pinterest
Label(s): Books, Books - 2005, Published 2001, Sandra Brown

"Cat on a Hot Tin Roof", Stratford Festival, Stratford, ON

From Stratford Festival ~ Though childless himself, aging football hero Brick Pollitt is clearly the favourite son and potential heir of dying plantation owner Big Daddy. But why does Brick seek oblivion in alcohol, and why has he neglected his beautiful and passionate wife, Margaret - driving her, on one fateful occasion, into the arms of his best friend?

We enjoyed this play. It's three hours with two 15 minute intermissions and has some fairly well-known Canadian actors.

We had cocktails at a couple local pubs before and after the play. Supper was at Sid's Sports Bar (across from the Avon Theatre). The food was good and the price was right (half price appetizers). Great train ride down and back.

We can't wait for next year's season!
By Teena in Toronto at 11:46 pm No comments:
Email ThisBlogThis!Share to TwitterShare to FacebookShare to Pinterest
Label(s): Live theatre, Live theatre: Stratford Festival

August's Girls Night Out Club's Gourmet Girls event was at Windows at the Rogers Centre. There were twelve of us and we had tables right by the windows that overlook the field.

The food was fair - there's not as much choice as at Sightlines (also at the Rogers Centre) and I found that most of it was cold. The curried chicken and rice was good so that's what I focused on. The chocolate banana cake was yummy.

I'm glad I got to experience it but I doubt I would go back again. Sightlines is a much better restaurant to watch the Jays and have a meal.
By Teena in Toronto at 11:26 pm No comments:
Email ThisBlogThis!Share to TwitterShare to FacebookShare to Pinterest
Label(s): Windows Toronto ON

From Amazon.com ~ The 69-year-old author wrote this collection of five stories and a novella between gigs tending boxers in their corners as a "cut man" (who stanches the blood flow and allows fights to continue). "The Money Look" is an turning-the-tables yarn at the expense of a cynical crook of a fighter; "Black Jew" is a telling tale of humble ambition woven with the lure of big money. A lacerating account of a courageous, deeply endearing hillbilly woman fighter and her sad fate, "Million $$$ Baby," is the best story in the book. "Fightin' in Philly" is a moving tale of the toll the ambition to be a title fighter takes on a man. Another innocent torn up by the fight game is portrayed in "Frozen Water." The novella, "Rope Burns," is pitting of an Olympic contender against a low-life East Los Angeles gang member at the time of the Rodney King riots.

Unfortunately he didn't live to see "Million Dollar Baby" made as a movie.

Definitely a good read if you are into boxing. I'm taking boxing classes so I found it interesting.
By Teena in Toronto at 10:00 pm 1 comment:
Email ThisBlogThis!Share to TwitterShare to FacebookShare to Pinterest
Label(s): Books, Books - 2005, F.X. Toole, Published 2005

From Amazon.com ~ Samantha Sweeting is on the verge of partnership at the prestigious London law firm Carter Spink, the Holy Grail of her entire workaholic life. But when she finds she has made a terrible costly mistake just before the partnership decision, she's terrified of being fired. In a fog, she stumbles out of the building and onto the nearest train, which drops her in the countryside, where she wanders to a stately home. The nouveau riche lady of the house mistakes her for the new housekeeper and Samantha is too astonished to correct her. Numb and unable to face returning to London, Samantha tries to master the finer points of laundry, cooking and cleaning. She discovers that the slow life, her pompous but good-hearted employers and the attentions of the handsome gardener, Nathaniel, suit her just fine. But her past is hard to escape, and when she discovers a terrible secret about her firm, and when the media learns that the former legal star is scrubbing toilets for a living, her life becomes more complicated than ever.

A fun read! It's the latest by the author of the Shopoholic series (which I find very funny).
By Teena in Toronto at 6:47 pm 3 comments:
Email ThisBlogThis!Share to TwitterShare to FacebookShare to Pinterest
Label(s): Books, Books - 2005, Published 2005, Sophie Kinsella
Newer Posts Older Posts Home
Subscribe to: Posts (Atom)