From Goodreads ~ You could call Bernie Guindon the Sonny Barger of Canadian bikers (but not to his face). The founder of Satan's Choice, Guindon led what was in the 1960s the second-largest biker club in the world (after the Hells Angels, which Bernie would join briefly in the early 2000s) to national prominence and international infamy.

His life wasn't all bikes and crime. He was also a medalist in boxing for Canada at the Pan Am Games. That tension between the very rough life he was born into and the possibility for success in the straight world (and how aspirations in each fed his success in the other) layer Guindon's story, one of the great untold stories in biker history.

Friends from the biker world and Guindon's family have given extensive interviews for Hard Road, including his son, Harley, a convict and outlaw biker himself.

Bernie Guindon's parents were from Quebec.  They eventually settled in Oshawa, ON, where his father was a bootlegger and physically abusive to his family and his mother spoke very little English and had a grade one education.  Bernie discovered at an early age that he was a good fighter and this was encouraged ... he eventually represented Canada in boxing in the Pan Am Games and was headed for the Olympics had he not landed in prison.  He never went professional because he was concerned his fists would then be considered a legal weapon. 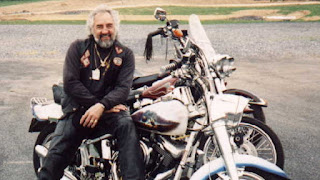 Bernie always loved bikes, especially Harley Davidsons, and started the Satan's Choice Motorcycle Club, eventually becoming president while still in his early 20s.  By 1970, Satan's Choice was second largest biker club in the world (behind the Hells Angels).  In those early days, he and his fellow riders were more rebels than criminals.  But as Satan's Choice grew in size, it became more involved in crimes. Bernie himself served about 15 years in prison, first for an indecent assault on a minor and later for drug trafficking.

Bernie has been married four times and has between 11 to 16 children, all but two from different women, and some born in the same year.  He was only actively involved in raising his son who he named Harley Davidson, who has done several stints behind bars.

This book is Bernie's story and the history of Satan's Angels (which eventually became part of Hells Angels).  It was an interesting one, that's for sure.  There are lots of pictures included in the book.
By Teena in Toronto at 1:00 am
Email ThisBlogThis!Share to TwitterShare to FacebookShare to Pinterest
Label(s): Books, Books - 2017, Canadian, Canadian 2017, Peter Edwards, Published 2017

Interesting read. Shame he spent his best boxing years sitting in prison. Life has choices. Obviously, this was only part of the story. The part he could tell. Tough life.