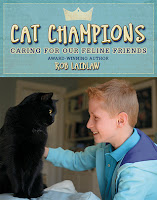 From Goodreads ~ Around the world, young people are making a difference in the lives of cats.

In "Cat Champions: Caring for our Feline Friends", meet kids who are helping at shelters, fostering kittens, volunteering with sterilization programs, and caring for abandoned cats.

Animal advocate Rob Laidlaw brings readers a hopeful, inspiring look at the issues facing domesticated and feral cats, and the "Cat Champions" who are working to help them.

Informational sidebars throughout the book describe issues facing cats ("The Cat's Out of the Bag") as well as good-news feline facts ("The Cat's Meow"). Filled with colour photographs and real-life stories, "Cat Champions" will inspire and empower readers of all ages.

At the Toronto Street Cats shelter building workshop on Saturday, volunteers were given this book.


In the back of the book there are a list of resources and links so you can get involved in cat welfare (Toronto Street Cats got a mention in the book and is listed as a resource) and a glossary.

Though written for children, I found this book to be fun and interesting.  The information is in bite-sized chunks and there are lots of colourful pictures.  There are stories about children making a difference in Canada, the U.S. and around the world.  I would think (and hope) they would be inspiring to other children.  There are also stories about cats like Tuxedo Stan (who ran for mayor in Halifax, NS), Scarlett (who saved her kittens from a fire in New York City and was burned in the process) and Simon the War Cat (back in the late 1940s, he lived on a British naval warship).
By Teena in Toronto at 8:04 am
Email ThisBlogThis!Share to TwitterShare to FacebookShare to Pinterest
Label(s): Books, Books - 2018, Canadian, Published 2003, Rob Laidlaw, The Canadian Book Challenge 12