It has become a holiday to tradition for Gord and I to see his favourite Christmas movie, Die Hard, around this time of year.  Tonight was our fourth year seeing it.

The last three years we have seen it at as a "quote-along" at the Hot Docs Ted Rogers Cinema but this year they didn't seem to be showing it.  The Revue Theatre scheduled it so we got tickets to see it there (Hot Docs Ted Rogers Cinema had since added it to their schedule but it's a different group putting it on).  It ended up selling out and they added a few more viewings. 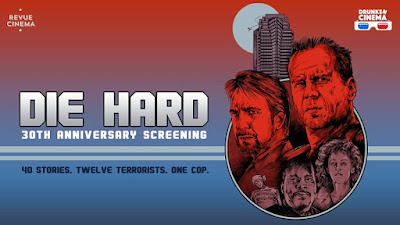 For our very first theatrical holiday installment in Toronto, we will take you on a drunken sleigh ride to Nakatomi Tower (A.K.A. Revue Cinema) to celebrate with John McClane and Hans Gruber!

Come and enjoy one of the most beloved Christmas films out there with your friends at Drunken Cinema!

There will be popcorn, a holiday themed pre-show mini drinking game, a themed cocktail and prizes to be given away!

Customized drinking game card and a glowstick is included in the price of admission.

We went shortly before 9pm and there was a line-up to the corner.  Once they opened the doors, the line-up moved pretty quickly. 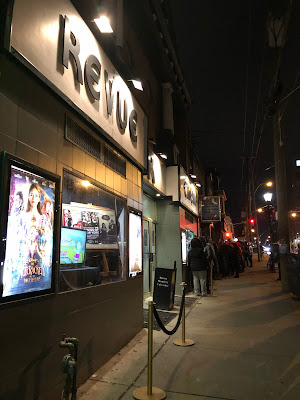 There was a huge line-up to get to the concession stand, which is in the lobby.  To ease this, they should have someone selling drinks and popcorn at the front of the theatre also. 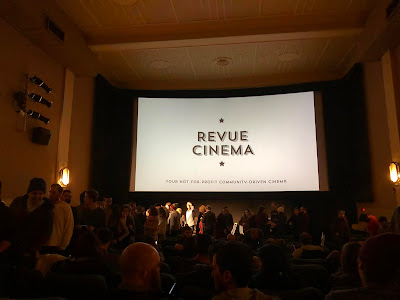 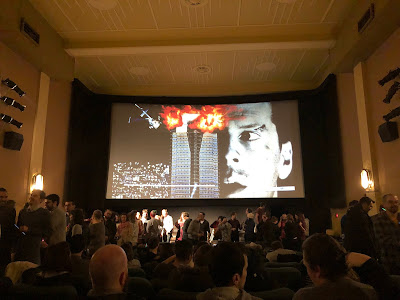 Before the movie started, there were old and new commercials shown along with a 22 minute Tales From the Crypt Christmas episode from 1989 starring Mary Ellen Trainer, who was a reporter in Die Hard.  The movie started about 10:15pm, with four prizes awarded to people in the audience. 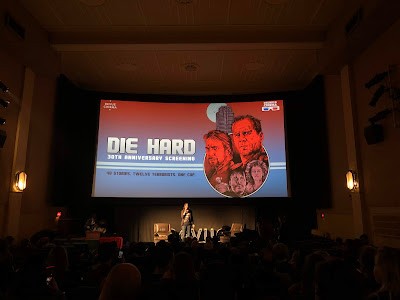 We were given a glow stick to wave whenever something Christmasy was happening on the screen.  I waved my stick for a while but then dropped it on the floor and left it there.  Eventually the enthusiasm in the audience waned and not many were waving theirs toward the end.  We were also given a drinking card and ours advised us to take a drink when glass was smashed (not much of a "holiday themed pre-show mini drinking game" in my opinion).

Though this wasn't a quote-along, Gord and I occasionally yelled out things from our experiences in past viewings.  At the end of the movie when Vaughn Monroe is singing Let It Snow! Let It Snow! Let It Snow!, everyone at the quote-alongs sings along enthusiastically.  Tonight people were standing up and getting reading to leave ... Gord and I stayed seated and sang.  We both agree that the quote-along concept is more fun so will be looking for it next year.
By Teena in Toronto at 11:59 pm
Email ThisBlogThis!Share to TwitterShare to FacebookShare to Pinterest

Well, it's always good to try something new, but it does sound like the Quote-a-long would be more fun!