Book ~ "Walking with Peety: The Dog Who Saved My Life" (2017) Eric O'Grey and Mark Dagostino

From Goodreads ~ Eric was 150 pounds overweight, depressed and sick. After a lifetime of failed diet attempts and the onset of type 2 diabetes due to his weight, Eric went to a new doctor, who surprisingly prescribed a shelter dog. And that's when Eric met Peety: an overweight, middle-aged and forgotten dog who, like Eric, had seen better days. The two adopted each other and began an incredible journey together, forming a bond of unconditional love that forever changed their lives.

Over the next year, just by going on walks, playing together and eating plant-based foods, Eric lost 150 pounds and Peety lost 25. As a result, Eric reversed his diabetes, got off all medication and became happy and healthy for the first time in his life-eventually reconnecting with and marrying his high school sweetheart.

"Walking with Peety" is for anyone who is ready to make a change in his or her life, and for everyone who knows the joy, love, and hope that dogs can bring. This is more than a tale of mutual rescue. This is an epic story of friendship and strength.

Seven years ago when he was 51, Eric weighed 340 pounds.  He was taking a lot of medications and getting more and more depressed about this weight, which made him even eat more.  As a salesman, he traveled a great deal.  The last straw for him was when he was on a plane heading home and the plane was delayed because they had to get a seat belt extender for him from another plane.  The guy sitting next to him commented to him that it was because of him that he was going to miss his connecting plane.

Eric consulted a plant-based naturopathic doctor who put him on a meal plan but also advised him to rescue a dog from a local shelter.  A dog would get him out walking and would be company for him.  He rescued Peety, who it turned out also rescued him and became his best friend.  Over the next year, between exercising and eating a plant-based diet, Eric lost about 150 pounds and felt great.  Peety benefited from the plant-based diet too by losing weight.  This is their story. 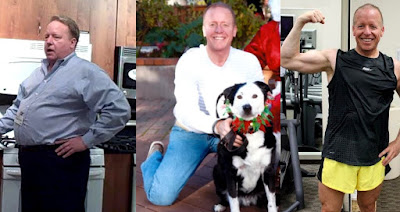 I liked the writing style.  Eric is honest about his journey, with his food choices, exercising and relationships (he hadn't dated in 15 years) and I found it interesting.  I would recommend this book to pet lovers and anyone looking to move to a healthier lifestyle.

At the end of the book, there are resources for more information about living a plant-based lifestyle and animal rescues.