"Bat Out of Hell The Musical", Ed Mirvish Theatre, Toronto, ON 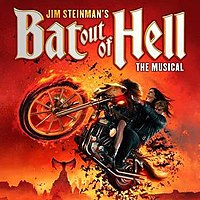 Gord and I saw Bat Out of Hell The Musical this evening.

The streets are heating up as young, rebellious leader Strat falls in love with Raven, the beautiful daughter of the most powerful man in post-apocalyptic Obsidian.

Originally written as a musical, "Bat Out of Hell" went on to become one of the most iconic and successful albums of all time. Forty years later, Jim Steinman’s critically acclaimed love story for the ages 'brings the theatre and its audience thrillingly alive' (The Stage).

The story is about Strat, who is the leader of The Lost, an underground group of kids who never grow older than 18.  He falls in love with Raven, who is the daughter of Falco and Sloane, who don't get along at all.  Falco is not a nice man and is very protective of Raven.

It is playing at the Ed Mirvish Theatre on Yonge Street (just south of Dundas Street E). 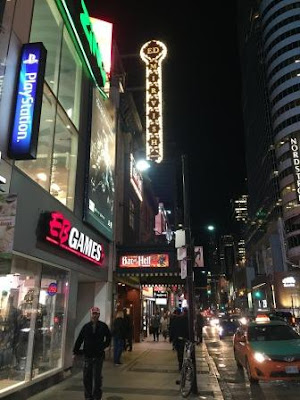 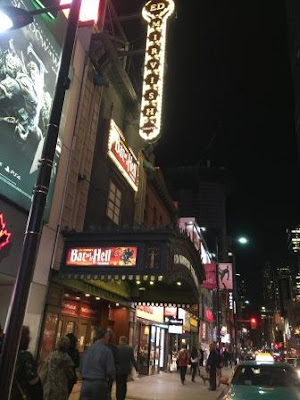 There were some photo ops.  There was a Harley in the lobby ... I thought it is in an odd spot as people were lining up to get their picture taken with it, which meant it was hard to get around them.   Here's Gord as a Bat out of Hell on the upper level! 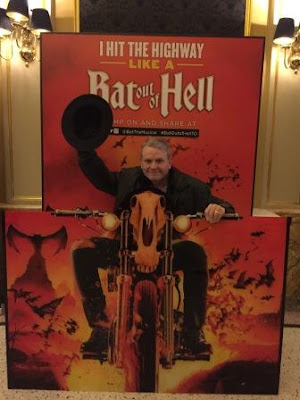 Here is the stage before it started. 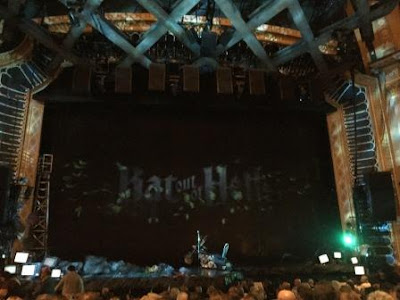 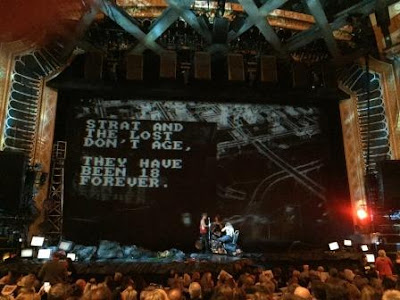 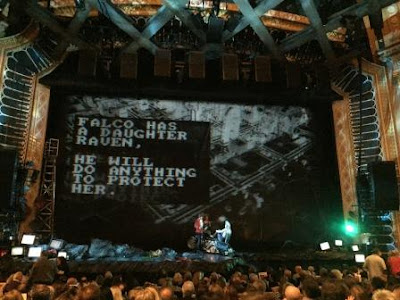 The stage was used quite creatively.  There were many components which were moved in and out quickly to change the scenery from The Lost's underground world to Falco and Sloane's living room to Raven's bedroom and so on.  At times there was a camera projecting the action on screens.

Bat Out of Hell and Bat Out of Hell II: Back into Hell are two of my favourite albums (still!) and most of the songs came from these albums (including All Revved Up with No Place to Go, Everything Louder Than Everything Else, Life Is A Lemon And I Want My Money Back, Out of the Frying Pan (And Into the Fire), Two Out of Three Ain't Bad, Paradise by the Dashboard Light, Bat Out of Hell, Heaven Can Wait, Objects in the Rear View Mirror May Appear Closer Than They Are, For Crying Out Loud, You Took the Words Right Out of My Mouth, Rock and Roll Dreams Come Through and I'd Do Anything for Love). I was curious to see how they would blend the songs in with a storyline and it worked.

When I like a play, musical or concert, I usually buy a teeshirt.  And tonight I did ...


I really enjoyed it and wouldn't mind seeing it again before it leaves Toronto.
By Teena in Toronto at 11:00 pm
Email ThisBlogThis!Share to TwitterShare to FacebookShare to Pinterest
Label(s): Live theatre, Live theatre: Mirvish