Gord and I saw Flashing Lights this afternoon.

“In the future, everyone will be famous for 15 minutes.”- Andy Warhol

"Flashing Lights" tells the tale of Peter, an unremarkable guy who inexplicably becomes famous. His dizzying rise and fall effects everyone around him, in particular his family; his savvy wife, Shannon, and their child, Ter. What starts off as a portrait of contemporary family life quickly unravels into a meditation on the borders between digital and physical existence and the future of this brave new world being created.

"Flashing Lights" combines a fantastical absurdist narrative with a highly physical theatrical style using technology like smart phones and tablets as puppets, masks, light and sound sources. Drawing on the ideas of Marshall McLuhan, Sherry Turkle, Jean Baudrillard and other theorists, the play speaks to the growing anxiety about the future and to the vertiginous feeling that time itself is speeding up. Will humankind’s frail, flesh and blood selves be able to keep up?

It's playing at the Theatre Centre at Queen Street W/Lisgar Street. 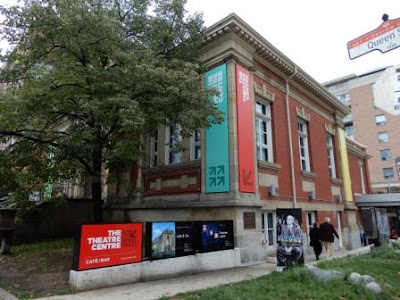 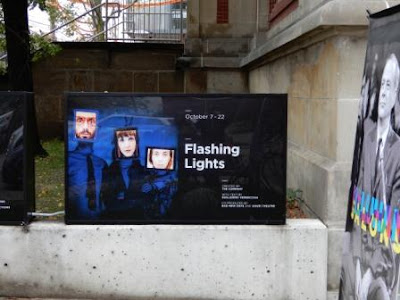 We sat in the second row.  There was a screen in front of the stage where videos and news clips were shown and/or the actors were projected. 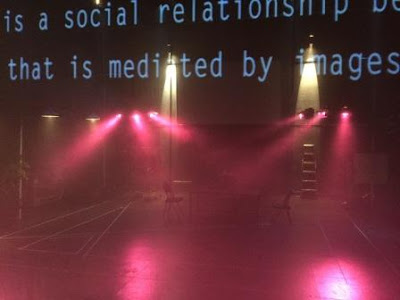 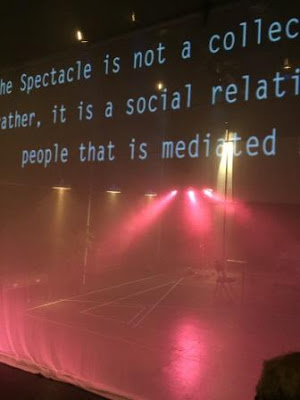 Peter, Shannon (his wife) and Ter (their daughter) are having breakfast one morning.  Ter videos her unemployed dad goofing around eating cereal singing the Eagle's Take it Easy and the video goes viral.  Peter becomes an instant celebrity and makes the most of his 15 minutes of fame.  Shannon, in the meantime, is promoting a product which combines your life and your body (on the Internet).  Ter is a rebellious teenager who eventually joins a commune.

It was an interesting but bizarre play and I liked it.  The five actors did an excellent job in their multiple roles.  The stage is minimal which works well since we also have to focus at times on what is being projected (via cameras and phones) on the screen in front of the stage.

Tickets are pay what you can afford.
By Teena in Toronto at 3:00 pm
Email ThisBlogThis!Share to TwitterShare to FacebookShare to Pinterest
Label(s): Live theatre