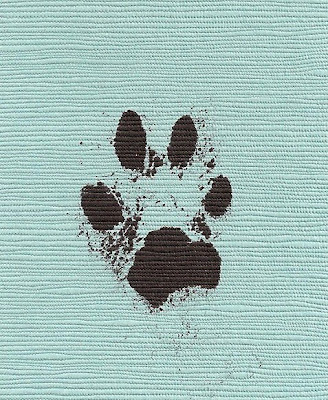 It's been almost three weeks since Byron's been gone.

We received a card of condolence from the animal hospital a couple days later. I had tucked it away without opening it because it was a sad reminder.

We had Byron cremated and I brought him home a week later.

I opened the card tonight and inside was a stamp of one of Byron's paws.

In the past, Gord and I had talked about getting tattoos of paw prints to remember the furkids we've had and will have.

This is definitely a sign that we should ... and we will.
By Teena in Toronto at 8:40 pm
Email ThisBlogThis!Share to TwitterShare to FacebookShare to Pinterest
Label(s): Furkids

What a lovely, thoughtful card. And I agree that that would be a great idea for remembrance.

That was sweet of the hospital. When are you getting the tattoo?.

Thats very nice of the vet.

that is really sweet! They made a plaster impression of my sisters kitty when he died.

a tattoo is also a great way to remember byron! =)

That's an incredibly sweet thoughtful thing to do. Wow. My kitty's wee ash urn sits on a windowsill to this day, as it was his favorite place to chill out.

I love the paw print card idea. I wish I had the same when my dog passed away when I was in high school.

That was thoughtful of the animal hospital to do that. I'm sure the waterworks began when you saw the paw print.