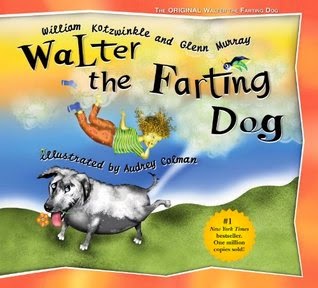 From Goodreads ~ "Warning: This book may cause flatulence."

Walter is a fine dog, except for one small problem: he has gas. He can't help it; it's just the way he is. Fortunately, the kids Billy and Betty love him regardless but Father says he's got to go!

Poor Walter, he's going to the dog pound tomorrow. And then, in the night, burglars strike. Walter has his chance to be a hero.

A children's beloved classic, this story will have kids rolling on the floor with laughter. Adults are permitted to laugh too.

John at The Book Mine Set blogged about Walter the Farting Dog this month.  Gord had bought me this book the summer we got married.  There was a bookstore in his neighbourhood we would walk by often and this book was prominently in the window.  I haven't read it since that summer so I read it again this evening.

It's a cute book directed at children about a dog who has a flatulence problem  The family does everything they can to make him stop but he can't.  The father finally declares that Walter has to go back to the pound but because his heroics one night, Walter gets to stay.  Yay!

The illustrations are colourful and cute.  Here's an example of when Walter was taken to the vet (notice the fart coming out of Walter's butt ... the poor vet!). 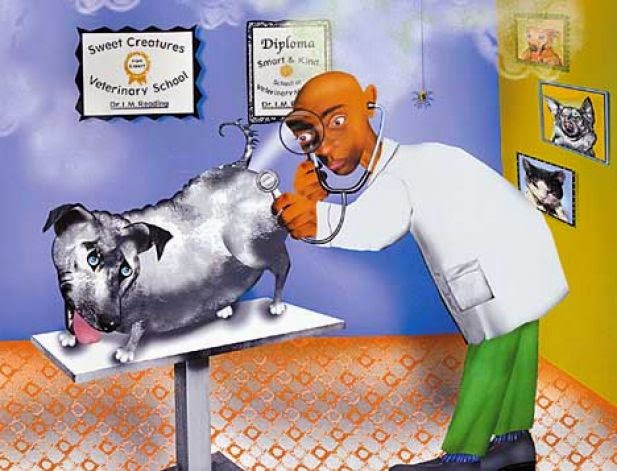 If you have a sense of humour and are looking for a book your kids will find funny, you should check it out.
By Teena in Toronto at 8:17 pm
Email ThisBlogThis!Share to TwitterShare to FacebookShare to Pinterest
Label(s): Audrey Colman, Books, Books - 2014, Canadian, Glenn Murray, Published 2001, The Canadian Book Challenge 7, William Kotzwinkle

Ha! I have to get this book for my Grandson. He will love it!

Glad I inspired a reread!

I remember buying my wife a pop-up book by David A Carter called Love Bugs when we were first dating. I believe we still have that tossing around somewhere as well.