This afternoon Gord and I saw Arrabal at the Panasonic Theatre on Yonge Street.  We were in the middle of the "F" row.

Arrabal, an exciting World Premiere, is an explosive story told entirely through dance and the music of multiple Academy Award winner Gustavo Santaolalla (Brokeback Mountain, Babel) and his band Bajofondo.

With a book written by Tony Award nominee John Weidman (Contact), follow Arrabal, our heroine, in this coming of age story as she enters the underground world of Buenos Aires’ tango clubs and discovers the violent history that took her father and disrupted a nation. Arrabal is based on the true story of the political violence that threatened to destroy Argentina in the 1970s. With a live band and performers direct from Buenos Aires, experience the sensual beauty and political intrigue that is Arrabal. 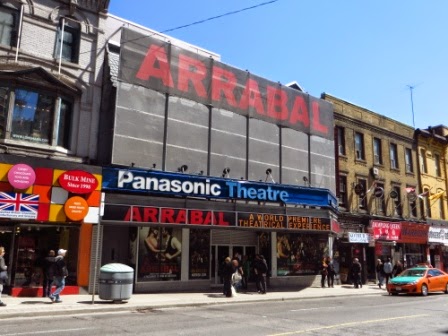 The performance is 90 minutes with no intermission.  Before the play started at 2pm, you could have tango lessons on the stage.  At the end of the play, the audience was invited up on stage to dance. 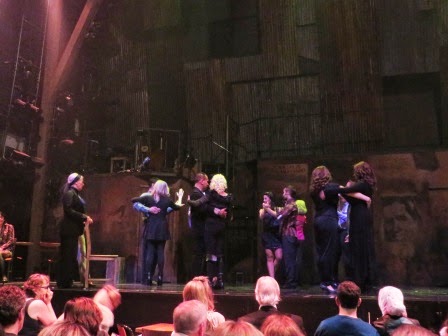 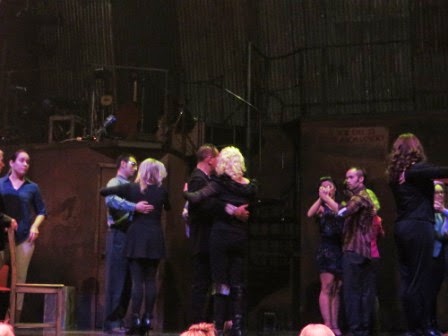 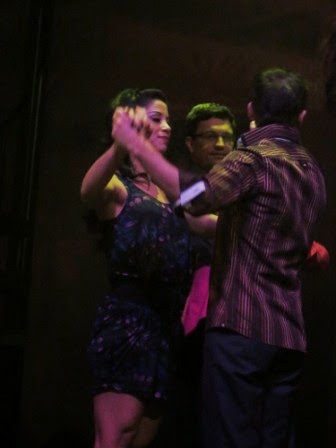 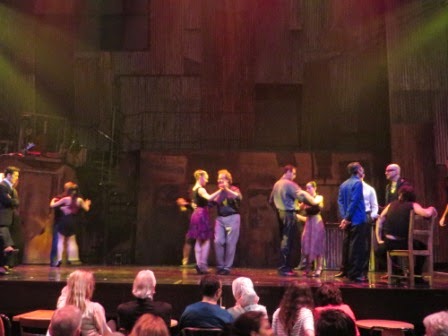 I thought it was just okay ... it's not my kind of play, I guess.  Gord enjoyed it more than I did and is considering about seeing it again (once was enough for me).

There was no talking or singing ... they expressed themselves through their dancing.  I've never been to the ballet but it's how I imagine it would be.  The music by Bajofondo was excellent (especially the violin player, Javier Casalla).  And the actors could really dance!

I didn't really know what was going until I read the playbill afterwards.    Here's a summary from the Globe and Mail:

The virginal heroine Arrabal (Micaela Spina) is being raised by her grandmother (Marianella). Her father Rodolfo (Julio Zurita) is one of the desaparecidos, a dissident who was arrested by the ruling military junta and made to disappear when Arrabal was an infant.

El Duende (Mario Rizzo) is the trickster who magically orchestrates Arrabal’s meeting with her father’s friend El Puma (Carlos Rivarola).  Puma and his wife, Berta (Veronica Alvarenga), run a dilapidated tango bar, where her father once worked, and which is the set for the show (some audiences members get to sit at tables on the stage).

Puma can’t get up the courage to tell Arrabal what actually happened to her father.  It allows Arrabal to have adventures – good ones like meeting the handsome Juan (Juan Cupini), and bad ones, like being seduced by Juan’s ex-girlfriend Nicole (Soledad Buss).
By Teena in Toronto at 3:30 pm
Email ThisBlogThis!Share to TwitterShare to FacebookShare to Pinterest
Label(s): Live theatre