From Goodreads ~ Leonard Nimoy and William Shatner first crossed paths as actors on the set of The Man from U.N.C.L.E. Little did they know that their next roles, in a new science-fiction television series, would shape their lives in ways no one could have anticipated. In seventy-nine television episodes and six feature films, they grew to know each other more than most friends could ever imagine.

Over the course of half a century, Shatner and Nimoy saw each other through personal and professional highs and lows. In this powerfully emotional book, Shatner tells the story of a man who was his friend for five decades, recounting anecdotes and untold stories of their lives on and off set, as well as gathering stories from others who knew Nimoy well, to present a full picture of a rich life.

As much a biography of Nimoy as a story of their friendship, Leonard is a uniquely heartfelt book written by one legendary actor in celebration of another. 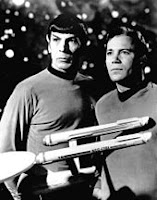 Leonard Nimoy was an American actor, film director, photographer, author, singer and songwriter. He was best known for his role as Spock of the Star Trek franchise, a character he portrayed in television and film from a pilot episode shot in late 1964 to his final film performance in 2013.  He past away in 2015 at the age of 83.

This book is written by William Shatner, his Star Trek co-star and friend of many years.  The book starts with Nimoy's childhood, growing up in Boston, the son of Jewish immigrants who had escaped from the Ukraine.  His parents had wanted him to go to university so he would have a "stable" career but instead he wanted to pursue acting.  Doing many odd jobs that rarely lasted more than two weeks while he was picking up acting jobs, he caught a break when he was cast as Spock in Star Trek.  In addition to playing Spock in TV shows and movies, he was also in plays, non-Star Trek movies and eventually directed movies (such as Three Men and a Baby).  Later in life, he became a successful photographer.

I will admit that I'm not a Star Trek fan but I do like learning more about different people.  I thought Nimoy would have an interesting life and he did.  It was interesting to learn Nimoy's story told from Shatner's point of view.  They didn't always get along but Shatner's love and respect for Nimoy comes through.

I liked the writing style and would recommend this book even if you aren't a Star Trek fan (like me).
By Teena in Toronto at 10:09 pm
Email ThisBlogThis!Share to TwitterShare to FacebookShare to Pinterest
Label(s): Books, Books - 2018, Canadian, David Fisher, Published 2016, The Canadian Book Challenge 12, William Shatner