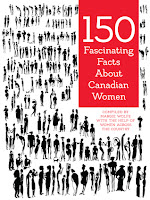 From Goodreads ~ Did you know that, in 1875, Grace Annie Lockhart graduated from Mount Allison University as the first woman to receive a degree in any British Empire country?

Or that in 1920, the Women's Labour League was formed calling for equal pay, maternity care, and birth control?

Or that all Black, Japanese, Chinese, and South Asian Canadian women couldn't vote federally until 1949?

Did you know that in 2008, Shannon Koostachin, a 13-year-old girl from Attawapiskat First Nation, led a rally to Parliament Hill that galvanized the movement for safe schools for Indigenous communities across Canada?

These are only a few of the fascinating facts about Canadian women who have - for much longer than 150 years - helped to shape this country.

This book has 150 facts about Canadian women and is a quick read.

Women of many cultures, backgrounds and races have always been workers, inventors, caregivers, scholars, factory labourers and creators of visual and performing arts.  They have advocated for social and judicial reform, fighting for change when it was needed and fighting for our rights when they were denied.

In addition to those facts listed above, here are some I found interesting ...