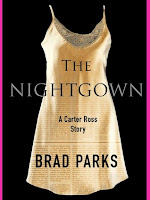 From Goodreads ~ Only 24 years old and still a wide-eyed reporter for a tiny backwater newspaper, Ross is getting his crack at the big leagues with an interview at New Jersey's largest paper, The Eagle-Examiner. If - that if - he nails the interview and the on-the-spot writing test. Ross has never had a problem spinning a story, but provided with notes he didn't take and quotes he didn't hear it feels flat, and he's not so sure about his chances.

So when a car crashes into a building in a nearby town and Carter overhears the assignments editor complaining that there's no one left in the building whom she can send out to cover the story, Carter jumps at the chance and quickly finds himself dangerously close to being in over his head.

This novella tells how Carter Ross got his job working for The Eagle-Examiner, a newspaper in New Jersey.  He was 24 years old, young and eager, and applying for the job as a reporter.  As he was going through the testing to show his talent, using information the newspaper provided so he could write a fake news story, a call comes in that a prominent local citizen had been in a car accident.  If alcohol was involved, this would be quite the scandal.

With no other reporters available, Carter volunteered and this instead became his test.  Knowing what's on the line, he was determined to do the best job he could.  As he investigated, he discovered that not everything was as it seemed.

This is the beginning of the Carter Ross series (though it was written after the first couple books had been written).  I like this series and enjoyed the writing style ... it was funny and sarcastic.  It is written in first person perspective in Carter's voice.
By Teena in Toronto at 8:00 am
Email ThisBlogThis!Share to TwitterShare to FacebookShare to Pinterest
Label(s): Books, Books - 2017, Brad Parks, Published 2012