The company I work for hosted a VIP night tonight for our clients and intermediaries to see Cirque du Soleil's LUZIA - A Waking Dream of Mexico.  There was an extra ticket and I was asked if I wanted to go ... shah!  Gord and I had seen it last month and enjoyed it so I didn't mind seeing it again.

Discover LUZIA, where a waking dream transports you to an imaginary Mexico. Experience a wondrous world that inspires you to explore your senses, enveloped in light and nurtured by rain.

It takes place in a tent that has been set up in a parking lot by the east end of Toronto Harbour. 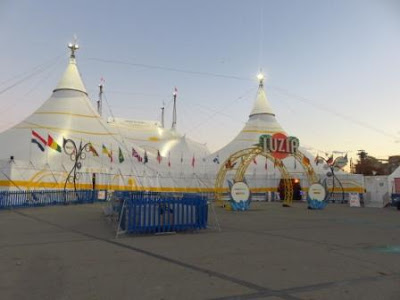 When we entered, there was a photographer waiting to take our pictures.


There was also a woman wearing a steel skirt with champagne glasses.  Servers walked around with appies and later during the intermission roasted marshmallow ice cream and cream puffs.

Gord and I had sat in the second level in the centre ... great seats!  Tonight our seats were right up by the stage ... my seat was in the third row in the centre.  While it was fun to be so close ... so close I could see facial expressions ... I would rather be further back in the seats Gord and I had because we could see the whole stage.


We were given a gift bag with a book, a CD and a handkerchief. 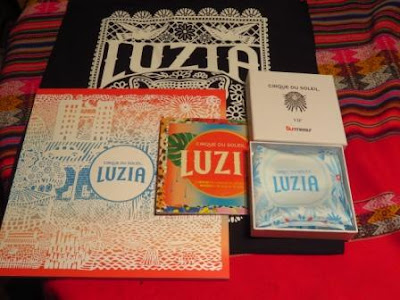 I still had no idea what the story was about (I never do with Cirque) but that didn't matter ... the show even the second time around was amazing.  There is a large cast and there is always something going on.  There are lots of acrobatics, balancing, hoop divers, juggling, singing, laughs (the clown was funny throughout the show trying to get water for his canteen), a contortionist (he was freaky!) and more.  With this show, there was a rotating rain machine which was cool.

It was definitely worth seeing the second time.
By Teena in Toronto at 10:30 pm
Email ThisBlogThis!Share to TwitterShare to FacebookShare to Pinterest
Label(s): Live theatre, Live Theatre: Cirque du Soleil