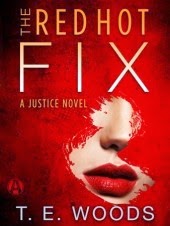 From Goodreads ~ A little more than a year after the Fixer killings, Detective Mort Grant of the Seattle P.D. once again has his hands full. In the last four months, seven men have been murdered in seedy pay-by-the-hour motels: first strangled, then tied with rope and set on a bed of crushed mothballs, with a red lipstick kiss planted on their foreheads. Speculation abounds that the killer is a prostitute who’s turning her tricks into dead men. The press has taken to calling her “Trixie.”

As Mort follows scant leads in the case, he can’t help but feel continued guilt over his involvement with the Fixer. Though the public holds her up as a folk hero, a vigilante who seeks justice when the system fails, Mort cannot shake the fact that serious crimes have been committed. And though legend says she has vanished, Mort knows exactly where the Fixer is - and he’s conspiring to keep her hidden.

As Trixie strikes again, Mort suddenly finds himself and his family in the crosshairs. These new murders are not random and their perpetrator is hell-bent on luring Mort into a sick and twisted game. If he’s not careful, he’s going to need Fixing.

Someone has strangled another man in a seedy hotel ... the police suspect it's a hooker with a vendetta against men and have nicknamed her "Trixie".  Mort is the police chief in charge of the investigation but can't figure out who the killer his.  He enlists the help of Charlotte, the founder of CLIP (Children Lost in Prostitution).

Lydia is a psychologist who we met in The Fixer.  She is recovering from wounds suffered in that book and has withdrawn from her old life.  She meets a young girl named Maizie whose father won't let her attend school.  Lydia and Maizie become friends and Lydia discovers some horrible truths in Maizie's life.

Reinhart Vogel owns a professional basketball team which his wife, Ingrid, runs.  The team is in the playoffs and Reinhart will do anything to ensure his team wins.

The stories become interconnected when there is another murder.

This is the second book I've read by this author and the second in the Mort Grant series.  I'd read the first one, The Fixer, in January and liked it ... and I liked this one too.  I liked the writing style and found the story interesting.  Though this one works as a stand alone, the first one provides more of the details of what happened to Lydia and why she and Mort are tied together.  As a head's up, there is some swearing.

I liked Mort.  He's a good cop doing his job while trying to move on in his life after the sudden death of his beloved wife.  He has a good (though long distance) relationship with his son Robbie, who is a reporter and successful author.  He hasn't seen his daughter, Allie, in many years.  The last time he saw her, she was the girlfriend of a drug dealer (he finds out her current situation in this book).  I found Lydia cold and couldn't relate to her, though I applauded her when she developed the relationship with Maizie.  Mort's friends and colleagues are supportive and provide humour at times.

I look forward to the next in the Mort Grant series.
By Teena in Toronto at 8:37 pm
Email ThisBlogThis!Share to TwitterShare to FacebookShare to Pinterest
Label(s): Books, Books - 2014, Published 2014, T.E. Woods

Sounds like a great read, but I definitely need to read the first one before this.

Thanks for taking the time to review this, Teena. It means the world to me that you liked it. Be on the lookout for "The Unforgiveable Fix", coming out October 14th. I'll give you a hint as to what it's about. Shhh...don't tell anyone...Allie comes home! Thanks again, T.E.Woods