Jane’s Walk celebrates the ideas and legacy of urbanist Jane Jacobs by getting people out exploring their neighbourhoods and meeting their neighbours. Free walking tours held on the first weekend of May each year are led by locals who want to create a space for residents to talk about what matters to them in the places they live and work. Since its inception in Toronto in 2007, Jane’s Walk has expanded rapidly.

We did the Landscape Archaeology of Garrison Creek walk.

This walk is about finding clues that reveal the original topography. We're going to look at sewer grates, retaining walls, finish floor levels and trees in an attempt to reconstruct the vanished landscape.

The walk was led by Jon Harstone, an author and local historian who lives in the west end of Toronto. With a background in architectural history and archaeology, Jon is a former board member of Heritage Toronto and the former Chair of the Toronto Local Architectural Conservation Advisory Committee (LACAC).  We did a Heritage Toronto walk (Between the Bridge and the Brewery: Trinity Bellwoods Neighbourhood) with him a couple years ago that was very interesting.

First some history of Garrison Creek ...

The creek had its beginnings about 12,000 years ago when the last remnants of the Wisconsinan Glacier melted. The glacier had moved across this area for at least 60,000 years. It had wiped the land clear of forests and left deep deposits of glacial drift (sand, clay, gravel and stones) perhaps 200 feet thick. As the great ice sheet continued to melt back, the St Lawrence valley became free of ice and the waters in the Ontario basin dropped to a lower level. Garrison Creek then cut a longer course Lake Ontario.

Lieutenant Governor John Graves Simcoe founded Toronto when he established Fort York in 1793. At that time, Garrison Creek flowed in a large deep ravine with several tributaries to Lake Ontario. The creek had sparkling clear water and was famous for its salmon fishing. As the new town of York grew, breweries were built on the creek to take advantage of the clean water. Soon, other entrepreneurs developed land beside the creek such as abattoirs, market gardens, Trinity College and residential country estates. Dozens of bridges were built over the ravine.

By 1880, development along the ravine had polluted the creek. The City buried the creek in an underground sewer where it flows today. Later, the city gradually filled in sections of the ravine and demolished or buried the bridges.

The walk started at Christie Pits and ended at Trinity Bellwoods Park (we live near this park and had a tree planted there in memory of our dog, KC) and was about two hours. 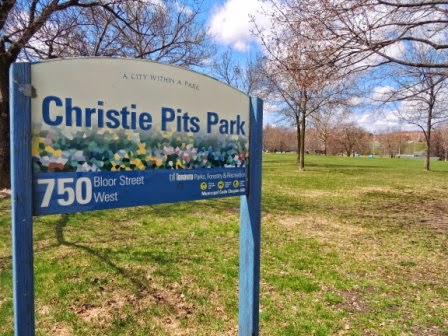 As we walked, we could see how streets and houses were affected by Garrison Creek.  We walked south on Grace Street and stopped by Bickford Park.  It was part of a brickyard and where they got clay.


The Harbord Street Bridge was buried in the 1940s but a bit still remains above ground.


We followed the sewers.  This one was in Art Eggleton Park. 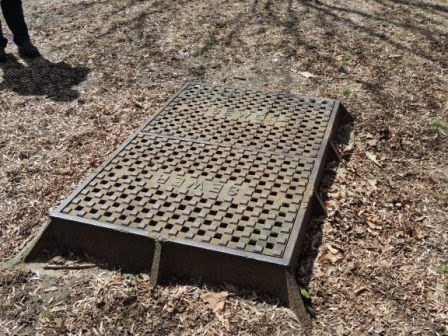 One level schools were built on top of the land covering the sewers ... it's city-owned land. 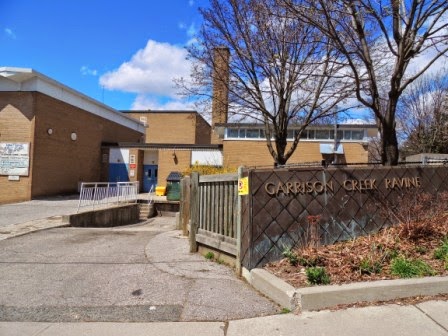 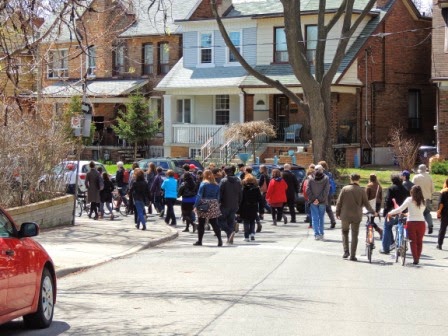 These houses show how they were built for the different water levels ... some are on higher ground. 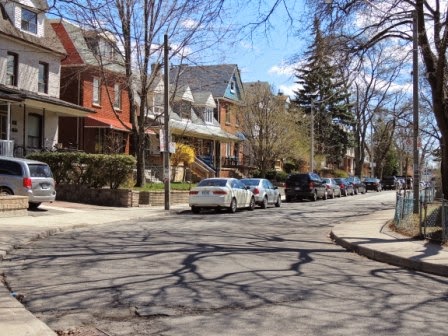 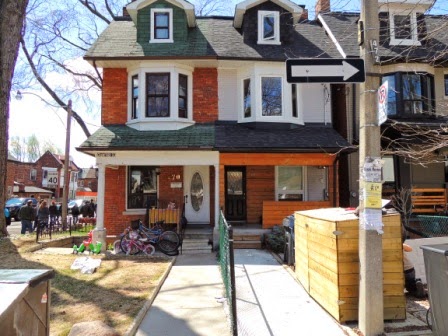 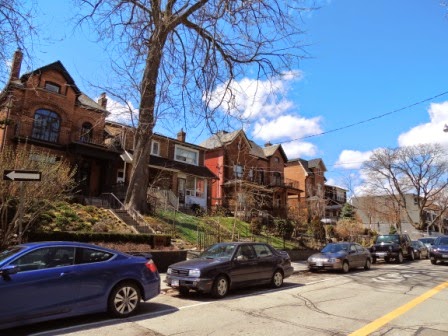 We stopped in Fred Hamilton Playground.  The creek went through it and there was a bridge.


In addition to following sewers, we also followed the Garrison Creek labels. 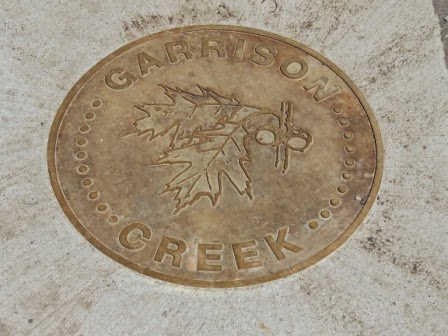 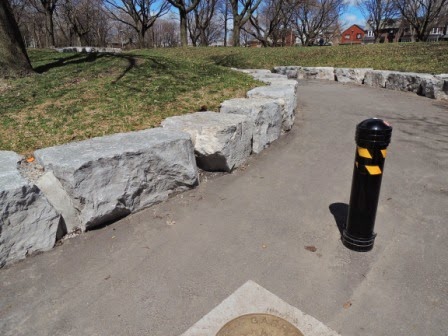 Some areas were built up ... like outside this house on Harrison Street (at Ossington Avenue).  There is actually a level lower than the lowest one we see ... 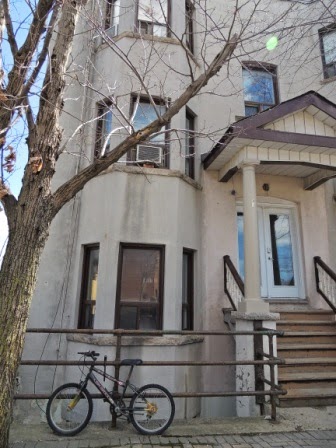 
When the ground level was raised at the Bellwoods Park House (at Shaw Street/Dundas Street W), the old trees were dug up, fill was added and the trees were replanted. 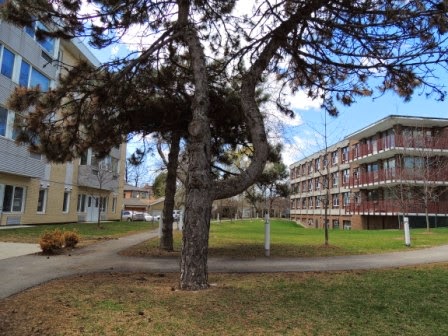 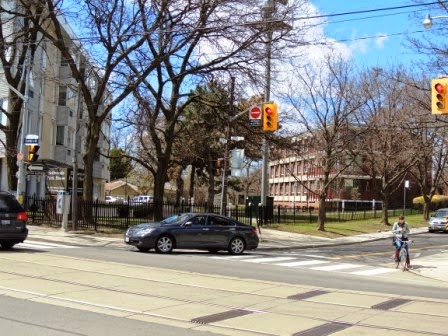 We crossed the Dundas Street W and headed south to Trinity Bellwoods Park. 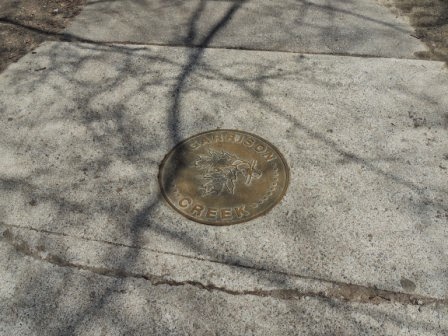 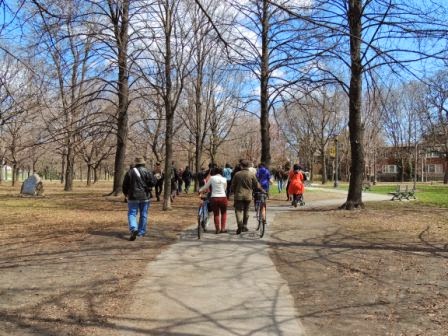 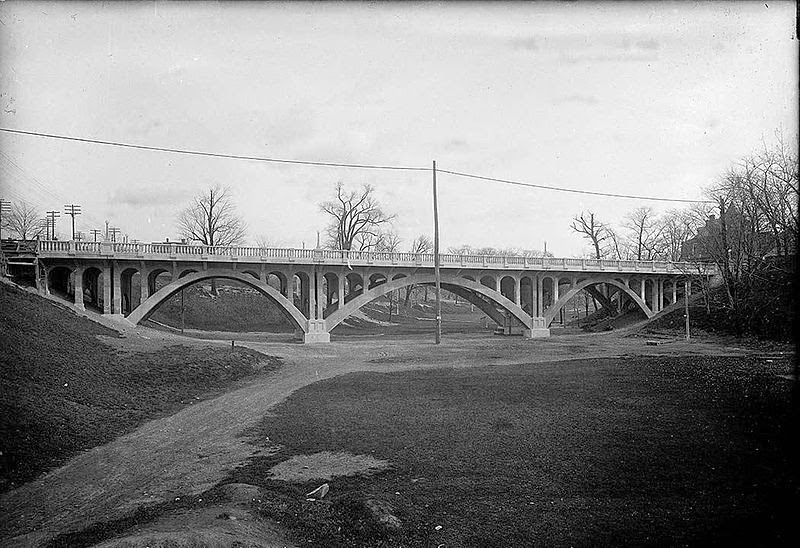 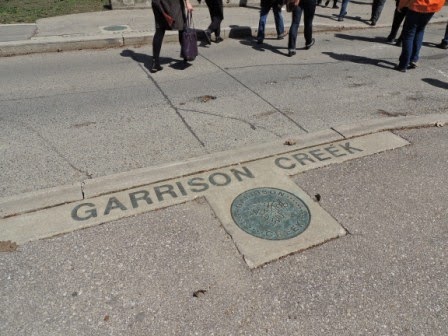 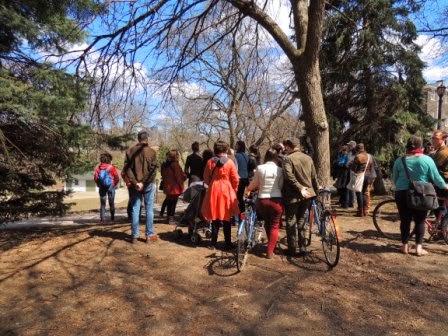 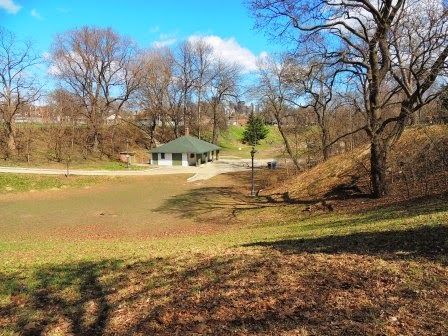 At the SE entrance of the park, there is a map of the creek. 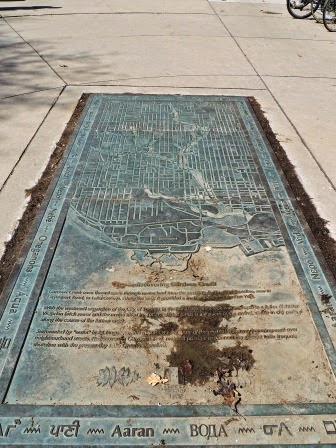 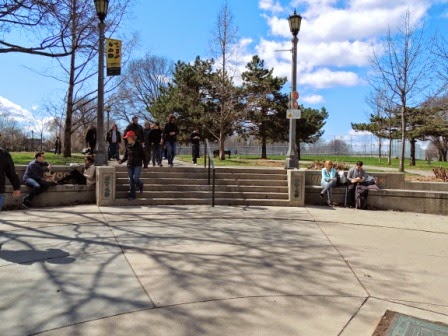 This was an interesting walk.  Jon was very knowledgeable and passionate about sharing the information.
By Teena in Toronto at 3:30 pm
Email ThisBlogThis!Share to TwitterShare to FacebookShare to Pinterest
Label(s): Jane's Walk

Chris and I would totally have signed up for that tour, too!

Wow lots of people and what a beautiful day for a walk. Send me some of your sun PLEASE!!!!!