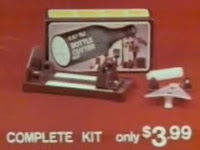 Gord and I watched a show about K-tel International today. It was quite interesting as it was part of our childhoods.

They sold handy products that you just couldn't live without in 1960s and 70s like the Veg-o-matic, the Bottle Cutter Kit (you could save money and turn your bottles into glasses!) and the mood shirt.

Then they got into the record business making compilations.

One of the first records I owned was K-tel's Fantastic ... it came out back in 1973 when I was in grade six. It wasn't 'til years later that I realized that the songs I thought I knew had extra verses ... K-tel would cut songs short so they could fit more on the record.

From the Vinyl Voyage:

More than any other K-Tel album I own, this album suffers from short versions of the songs. K-Tel managed to fit a lot of music onto their vinyl. This was often accomplished by making the gaps between the songs shorter and the grooves not as wide. K-Tel albums were not known for their fidelity. Many of the songs on this album fade early or are edited shorter. Some of the songs are less than two minutes long.

But that's okay. They still manage to give us almost 45 minutes of music on a single album. And the thing that Fantastic demonstrates about K-Tel is the eclectic variety that often appeared among the tracks.

By Teena in Toronto at 1:42 pm
Email ThisBlogThis!Share to TwitterShare to FacebookShare to Pinterest