Riverdance as you’ve never seen it before! A powerful and stirring reinvention of this beloved favorite, celebrated the world over for its Grammy award-winning score and the thrilling energy and passion of its Irish and international dance. Twenty-five years on, composer Bill Whelan has rerecorded his mesmerizing soundtrack while producer Moya Doherty and director John McColgan have completely reimagined the ground-breaking show with innovative and spectacular lighting, projection, stage and costume designs. Immerse yourself in the extraordinary power and grace of its music and dance - beloved by fans of all ages. Fall in love with the magic of Riverdance all over again.

For over 25 years, nothing has carried the energy, the sensuality and the spectacle of Riverdance.

Riverdance began its journey as the interval act in the 1994 Eurovision Song Contest, produced for television by Moya Doherty. This electrifying and innovative seven minute dance piece was then developed into a full-length stage show by producer Moya Doherty, composer Bill Whelan and director John McColgan. With its fusion of Irish and international music and dance, the show broke all box office records during its world première run in Dublin in early 1995. When the show transferred to London the reaction was unprecedented. There followed a hugely successful tour starting in New York in March 1996, where 8 sold-out shows at Radio City Music Hall heralded the start of two decades of touring by Riverdance companies throughout North America. Since its inception Riverdance has packed theatres throughout North America, Oceania, Asia, Europe, South Africa and South America.

It is at the Princess of Wales Theatre  from February 25 to March 1, 2020.  I've been wanting to see it for years.  I even bought tickets with my friend, Franca, to see it a few years ago but ended up having to head to New Brunswick for work (so she took a friend ... I'm glad my ticket was used). 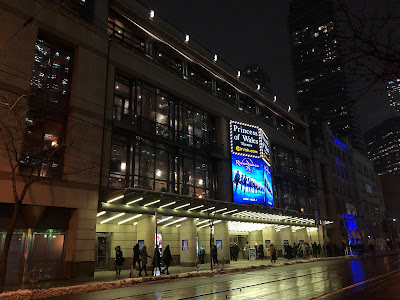 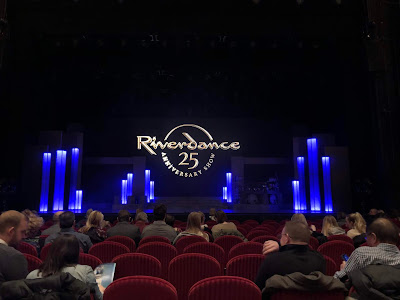 I wasn't sure what to expect ... I assumed it would be a couple hours of Irish dancing and music, which would have been fine with me.  But that's not the case.  There was singing, dancing and instrumentals.  The singing and instrumentals were at times lively, which was fun, and mournful.  That dancing was fabulous!  The flamenco soloist (Rocio Montoya) was a surprise.  What stood out was the dance off between two tap dancers (Lamont Brown and Tyler Knowlin) and three Irish dancer in New York.  Wow!

I'm glad I finally got to see it!
By Teena in Toronto at 10:30 pm
Email ThisBlogThis!Share to TwitterShare to FacebookShare to Pinterest
Label(s): Live theatre, Live theatre: Mirvish