Gord and I are season ticket holders for the Toronto Rock lacrosse team games ... the Rock is a professional lacrosse franchise in the National Lacrosse League (NLL).  This is our seventh year going to the games and our sixth year having seasons tickets.

Halifax Thunderbirds is a new team in the league.  Going into tonight's game, Toronto and Halifax were tied for first place.

My sister, Sarah, and her husband, Joey, live in Halifax and we gave them tickets for tonight's game for Christmas.  Gord and I also bought tickets for the game but didn't tell them.  Hee hee hee!  It was our first "away" game.  Gord and I were in our seats when they arrived and they didn't even notice us at first.  Ha!! 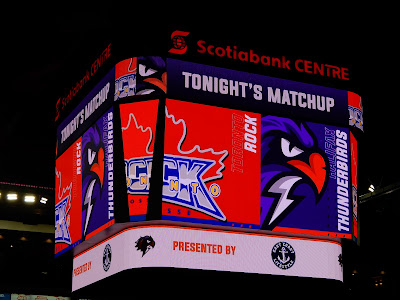 The theme for tonight's game was an East Coast Kitchen Party.  East Coast Lifestyle teeshirts were given out to the first 5,000 attendees (Gord and I both got one), there were fiddlers in the food and drink area, drink and food specials, and a fiddler entertaining in the middle area before the game. 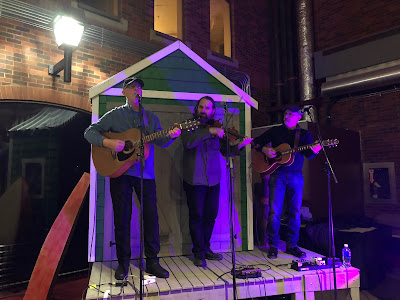 Gord and I got there early enough to watch the Rock players warm up. 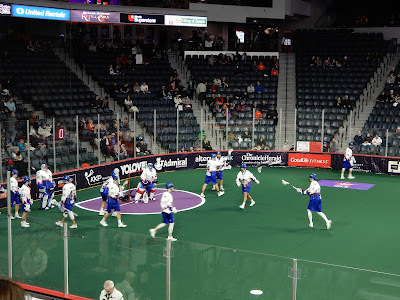 The Thunderbird players entered the arena through a giant thunderbird. 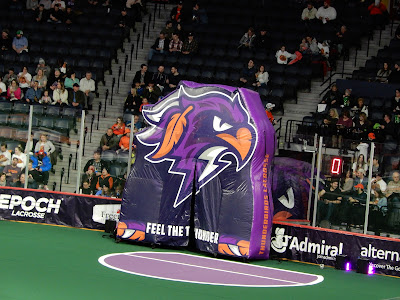 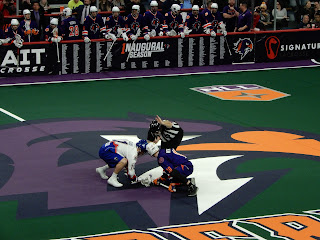 We bought tickets in a similar spot as our tickets in Toronto.  Here's the view from our seats ... 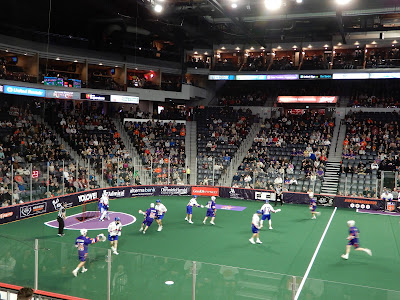 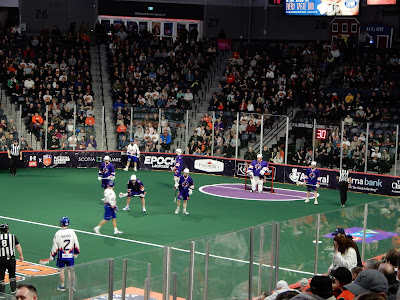 After the first quarter, the score was tied 3 - 3. 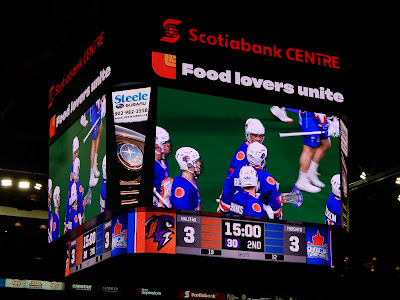 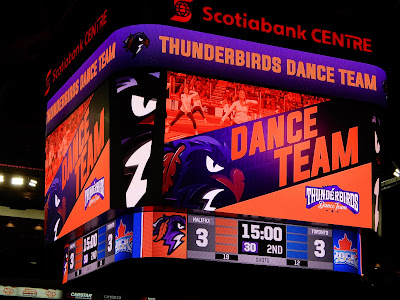 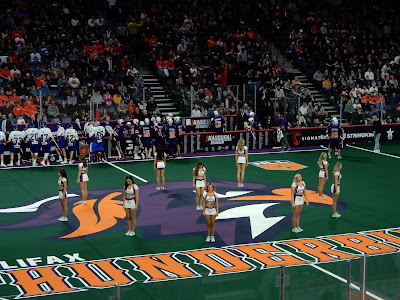 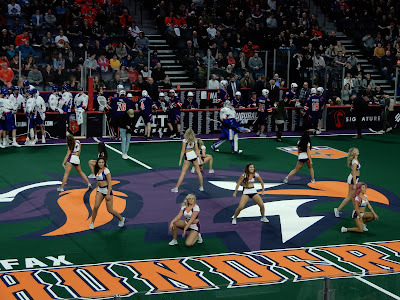 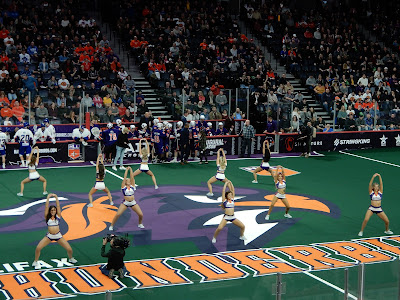 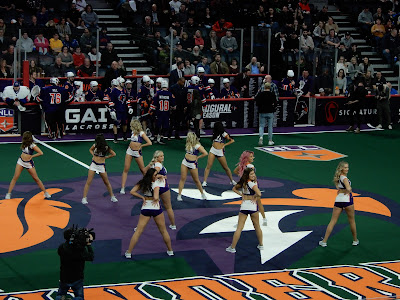 Bolt, the Thunderbirds' mascot, was in our section. 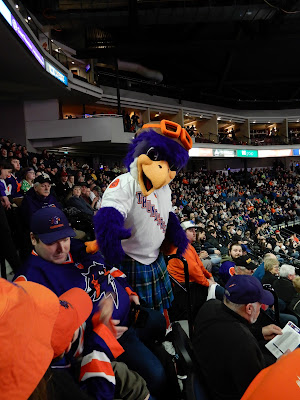 After the first half, Halifax was winning 7 - 5. 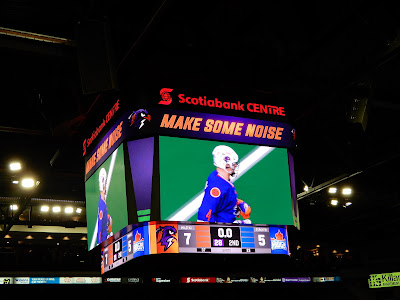 Local band, Shameless, entertained during the half time. 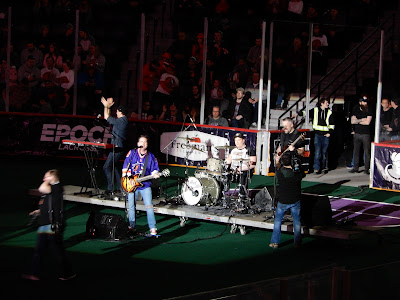 And the second half began ... 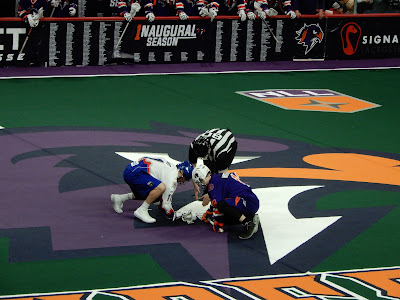 At the end of the third quarter, Halifax was winning 8 - 5. 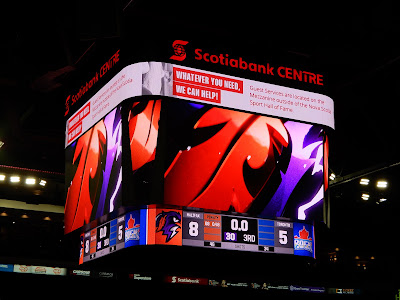 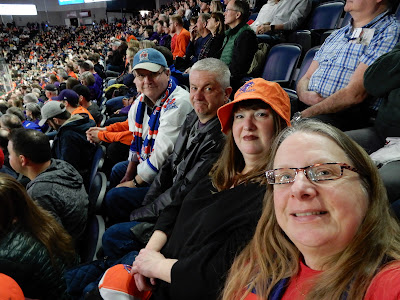 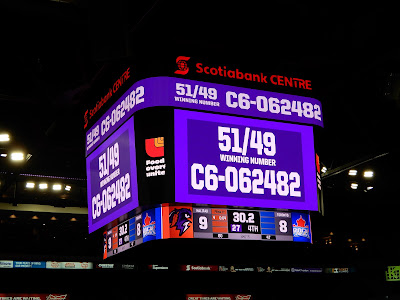 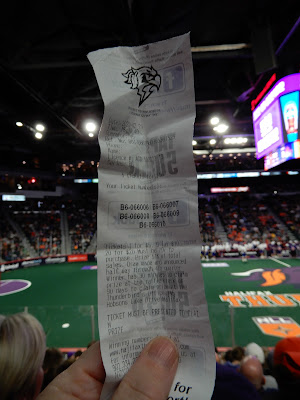 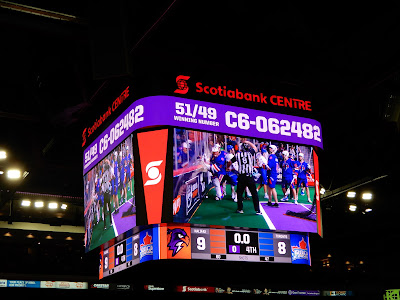 The Thunderbirds congratulated each other. 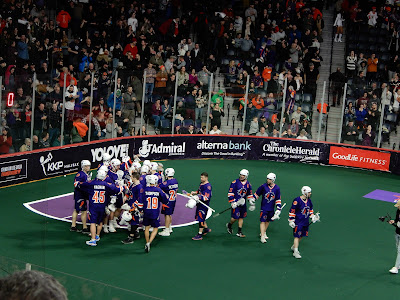 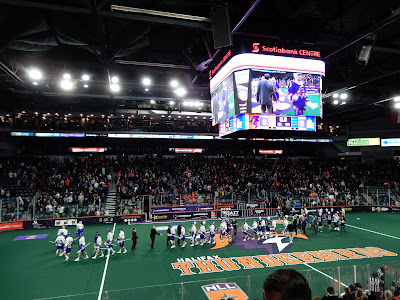 The Thunderbirds, Bolt and coaches did a cool thing ... they formed a circle with arms around each other before doing a lap along the boards, thanking the fans for coming out. 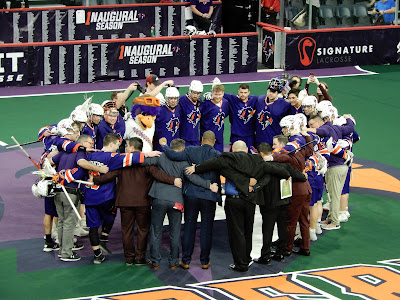 And here we are again ... Gord, Sister Sarah, Joey and me. 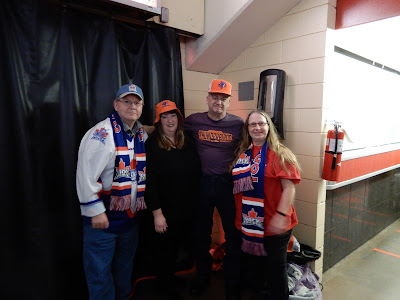 Though Toronto lost, it was a fun game.  We were obviously surrounded by Thunderbirds fans and it was fun trash-talking with them.  The arena holds about 10,000 and there were almost 9,400 in attendance.  The enthusiasm for the Thunderbirds was amazing!
By Teena in Toronto at 9:30 pm
Email ThisBlogThis!Share to TwitterShare to FacebookShare to Pinterest
Label(s): Toronto Rock