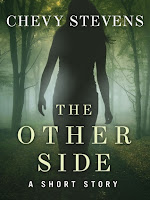 From Goodreads ~ Sandy is working the biggest case of her life - the Campsite Killer, who has been hunting women for almost forty years. She’s finally close to nailing him, if she can just keep her head in the game.

But when an old friend calls with a lead about Sandy’s mother’s murder, Sandy is pulled into the past - a past she thought she’d closed the door on. Her life is about to get real complicated, real fast.

Sandy is a cop looking for the Campsite Killer.  He has been on the run for many years but popped up recently when he contacted his adult daughter, Sara.  She is also dealing with something from her past ... her mother had been murdered by her father and then he disappeared.  And if that wasn't enough, her boyfriend of many years is pressuring her to have a baby.

This is a side story of Never Knowing focusing on Sandy, which I read last month.  It's written in first person perspective from Sandy's point of view.  There are characters from Never Knowing including Billy (Sandy's partner) and Nadine (Sara's psychiatrist).
By Teena in Toronto at 2:04 pm
Email ThisBlogThis!Share to TwitterShare to FacebookShare to Pinterest
Label(s): Books, Books - 2015, Canadian, Canadian 2015, Chevy Stevens, Published 2013