"The Phantom of the Opera", Princess of Wales Theatre, Toronto, ON

I saw The Phantom of the Opera tonight, presented by Mirvish Productions at the Princess of Wales Theatre (it's the U.S. tour).

I've seen it about five times and it's one of my top five favourites.  I'd seen the original production that ran in Toronto for ten years in the late 80s/early 90s with Colin Wilkinson in the title role (he was awesome).  It was probably the first mega-musical I'd seen. 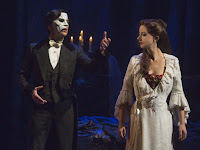 I thought the actors did an excellent job in their roles.  Chris Mann as the phantom made me feel sorry for him even though he is the bad guy.

The set is scaled back from other productions I've seen but I didn't find it lacking.  They were creative with what they did.  There are lots of pyrotechnics ... some a bit too bright so I had to look away and I felt the heat (I was 13 rows back in the middle).  The chandelier at the end of the first act sudden drops ... and it dropped right above me.   Pieces of glass flew among the crowd.


It's in Toronto until January 23 and worth checking out.
By Teena in Toronto at 10:00 pm
Email ThisBlogThis!Share to TwitterShare to FacebookShare to Pinterest
Label(s): Live theatre, Live theatre: Mirvish

I saw it when I was 9 - possibly in that very venue.