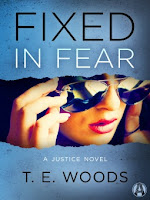 From Goodreads ~ Seattle Chief of Detectives Mort Grant cannot reconcile the memories of his vibrant, headstrong young daughter with the cold, deadly woman she has become. The head of one of the largest criminal enterprises in the world, Allie Grant seized power by wrenching it away from her lover, a notorious Russian gangster. How she maintains her control, Mort doesn’t even want to imagine.

Only two other people know the truth about Allie: the vigilante known as The Fixer, and Mort’s best friend, Larry, who’s undergoing a crisis of his own. Someone close to Larry, his last real connection to his beloved late wife, has been slain in a mass murder at a sweat lodge deep in the woods of Washington State. When word gets out, Mort immediately takes on the gruesome case.

But as Mort hunts down a pair of methodical killers, The Fixer does some deep digging of her own. And what she unearths will rock Mort’s family forever. Because The Fixer has set her sights on Allie Grant - and nothing will ever be the same again.

Mort is the chief of the homicide detectives in Seattle.  Five people are found murdered in a spiritual sweat lodge not far from Seattle ... one of them is Carleton, the uncle of the late wife of Mort's good friend, Larry.  Because of this, Mort offers to help the chief of police in the town find out what's going on.

In the meantime, Mort's estranged daughter, Allie, is back in town wanting to have a relationship with her dad, brother, sister-in-law and nieces.  But Allie was the mistress of a Russian gangster ... she had killed him and taken over his power.  Obviously Mort and his family don't want anything to do with her until she confesses her crimes and takes responsibility for them.  Well, that's not going to happen so Allie turns to Mort's friend, Lydia, for help to persuade Mort to change his mind.

This is the fifth book I've read by this author and the fifth in the Mort Grant series (I've read them all) ... I liked it.  Though it is part of a series, it can be read as a stand alone as there is enough information provided. It's written in third person perspective and I liked the writing style. As a head's up, there is swearing and violence.

Mort had a lot going on.  In one of the storylines, Mort is trying protect his family against his dangerous daughter.  In the other, he is supporting his friend, Larry, who as executor, has to go through Carleton's things, which brings back memories of his beloved late wife.  Lydia is trying to stay in the background, as usual, but Allie's actions make her consider some actions she doesn't want to do.  There was a lot of focus on Robbie's twins, Hayden and Hadley, and I found them a bit annoying.

I look forward to the next one!
By Teena in Toronto at 9:08 pm
Email ThisBlogThis!Share to TwitterShare to FacebookShare to Pinterest
Label(s): Books, Books - 2015, Published 2015, T.E. Woods