We don't eat a lot of frozen pre-made meals ... but it's handy to have some in the freezer when we are in a hurry or lazy.

Last week Schneiders' Hot Stuffs were on sale so I bought three kinds ... cheeseburger, pepperoni and Philly-style cheese steak.  We'd never had them before.

I tried the cheeseburger and pepperoni ones and they weren't good.  There was a funny taste to the cheeseburger one that I couldn't figure out ... I read the box afterwards and there were supposed to be some pickles (pickles?!) in them.

I heated up a Philly-style cheese steak one for brunch today ... and it was NASTY.  I took a couple bites and that was enough.  I opened it up and here it is ... 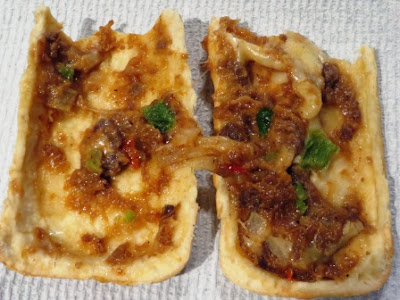 It sooooooo doesn't look like the picture on the box, does it?! 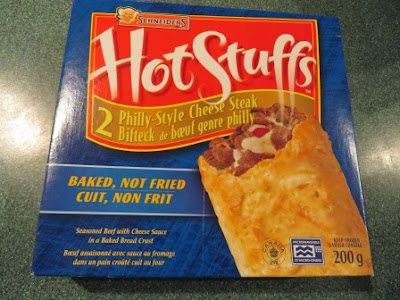 They are all basically bland dough with not much stuff in them.

We had a six more boxes in the freezer and I have thrown them in the garbage where they belong!

December 4 update:  Schneiders had responded to my tweet yesterday and asked me to call about my experience ... so I just did.  Bonnie was very friendly and polite and we had a nice conversation.  She said she is going to put some coupons in the mail to compensate us. 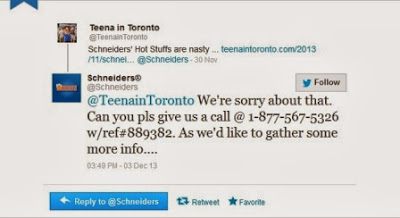 December 12 update:  I received $20 in coupons from Bonnie this week.  Impressive customer service! 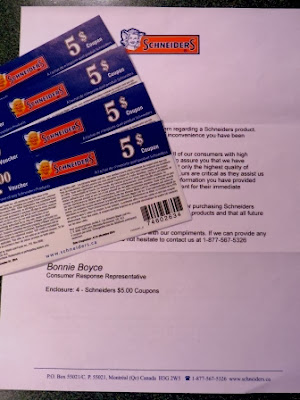 By Teena in Toronto at 11:28 am
Email ThisBlogThis!Share to TwitterShare to FacebookShare to Pinterest

Ew, they don't even look good in the picture. I don't think these are available down here, but if I ever see them, I will be sure to keep walking.....

Those... don't look good at all. I eat those only when there's absolutely nothing left in the house.

I've had them I like them ..cheeseburger ones are great and yes there is pickle and onion in them have never been disappointed

I love them.. And I know that when I buy a cheeseburger at McDonald's... It comes with pickles.. Standard toppings on a cheeseburger. Lol.. But that's just my opinion

Where in canada can you buy them ?!?!?! I use to eat them when I was is elementary school and haven't been able to find them since !! If they still make them please let me know where to look !!!!