I've been a big fan of Weird Al Yankovic for many years ... I have all his albums on my ipod.

Here I am (wearing the teeshirt for his 1992 Off the Deep End album) with him in 1993 ... I stood in line for over 90 minutes at HMV to get his autograph during his tour for Alapalooza (I went to that concert). 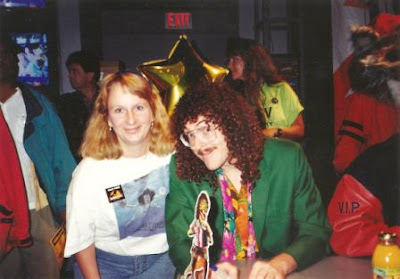 I'd heard that he was coming to town for a concert today but we had plans to go out of town so I didn't get tickets.

Our plans changed but I'd forgotten about Weird Al. About 1pm today, Gord and I were getting ready to go to the gym. Something reminded me that Weird Al was in town. Just for fun, I checked to see what time the concert was. There were two ... at at 3pm and one this evening.

Sudden change of plans ... I got tix for the afternoon show with just a couple hours to spare.

There were cameras throughout the theatre as they were taping the concert. There were tons of seats available so they were moving people into the ones that would be on the camera. Gord and I were able to move down a bit.

Weird Al played lots of songs from his new album, Alpocalypse, along with old favourites.

Because they were taping the show, there were lots of ushers in the theatre making sure no one took pictures. Gord managed to snap this one during the second last song. 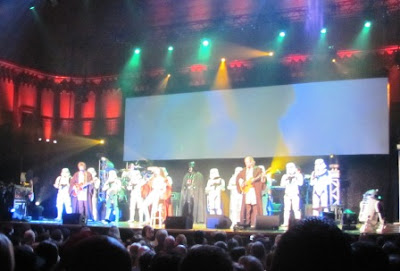 It was an okay concert (about 2.5 hours) ... he seemed to be playing more to the cameras than the audience. It was a combo of Al singing then, during costume changes, clips from Al TV, videos, mentions of him in TV shows, etc. It was definitely a show for diehard fans and there were plenty in the audience. Thanks to Gord for being such a good sport and coming with me.
By Teena in Toronto at 5:45 pm
Email ThisBlogThis!Share to TwitterShare to FacebookShare to Pinterest
Label(s): Concerts