When we got Crumpet last month from the Annex Cat Rescue, she'd had her first set of shots.

I took her this morning for her second set of shots at our vet.

She was such a good kitty! She wasn't the energetic spaz she is at home. I let her out of the carrier and she nosed around. 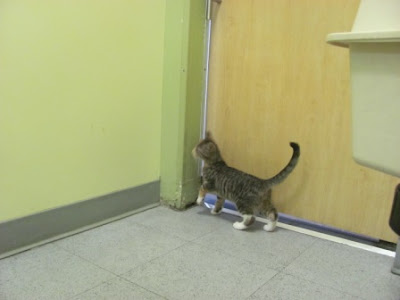 She didn't freak when the vet checked her out. He said that she is perfect and healthy. She weights just over 1.5kg (so has doubled in weight since we got her).

Since her mom had been living on the streets before being taken in, we had Crumpet tested for the feline leukemia virus and feline immunodeficiency virus ... she's clear. Yay!

Morgan knows that a cat carrier means someone is going in it and then is taken to the vet's. He took off into hiding to make sure it wasn't him. When we came home, Crumpet found him in my closet sleeping and snuggled in nearby. 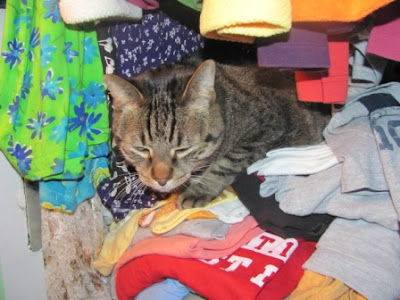 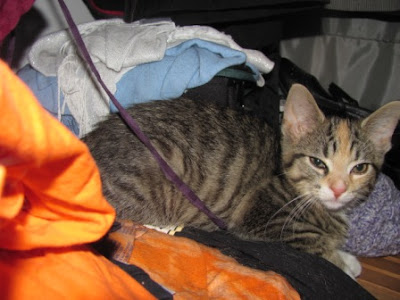 In about three weeks, I have to take her back for another set of shots.

I asked the vet about getting her fixed. He wants to wait 'til she's about six months ... he doesn't think kitties should be fixed sooner than that.
By Teena in Toronto at 10:02 am
Email ThisBlogThis!Share to TwitterShare to FacebookShare to Pinterest
Label(s): Furkids

Meadow goes for her yearly visit this Saturday. I've been for every one, I burst into tears the first one. LOL! She doesn't like it much.

I'm glad she's doing ok and everything looks well. Odie doesn't like going to the vet. The last time he needed shots, i had to walk with the nurse to the area cause he was not having it.

Good to hear all is well with the new addition.