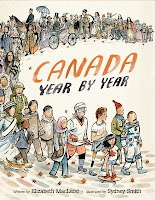 From Goodreads ~ Award-winning author Elizabeth MacLeod's year-by-year tour of Canada's fascinating history highlights a single milestone for every year from the country's founding in 1867 up to its 150th anniversary in 2017.

Divided into ten distinct eras, coverage ranges from politics, sports, business and arts and culture, and includes significant events both at home and in world affairs. A few examples:


Along with the featured stories for each of the 150 years, the pages are filled with sidebars - with content such as short biographies, quotes, important firsts and trivia - that are linked to that year.  There are also 39 capsule biographies of noteworthy Canadians at the back of the book.

Illustrations by awarding-winning artist Sydney Smith bring a contemporary feel to the stories of the past.

This book provides chunks of information about Canada, for 150 years starting in 1867 right up to 2017.  The sections are:

The book chooses one topic to highlight every year since 1867 and covers in politics, sports, entertainment, people, space, wars, nationalities, etc.  There are also side notes for some years.  The year I was born discusses the changes in immigration laws (you don't have to have a sponsor but could live here if you  have the required education, skill or other qualifications).

Though it is written for children, I found this book interesting and not childish or immature.  The tidbits were short enough to keep my attention but told me enough.  The accompanying drawings were cute.
By Teena in Toronto at 9:37 pm
Email ThisBlogThis!Share to TwitterShare to FacebookShare to Pinterest
Label(s): Books, Books - 2016, Canadian, Canadian 2016, Elizabeth MacLeod, Published 2016, Sydney Smith