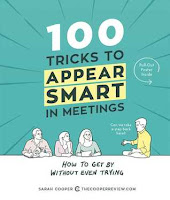 You know those subtle tricks your coworkers are all guilty of? The constant nodding, pretend concentration, useless rhetorical questions? These tricks make them seem like they know what they’re doing when in fact they have no clue. This behavior is so ingrained, so subtle, and so often mistaken for true intelligence that identifying it, calling it out, or compiling it into an exhaustive digest has never been attempted. Until now.

Complete with illustrated tips, examples, and scenarios, 100 Tricks gives you actionable ways to use words like “actionable,” in order to sound smart. Every type of meeting is covered, from general meetings where you stopped paying attention almost immediately, to one-on-one meetings you zoned out on, to impromptu meetings you were painfully subjected to at the last minute. It’s all here.

If you hadn’t noticed these behaviors before, you will see them now - from your colleagues, your managers, and soon yourself. Each trick is a mirror to the reality of what happens in meetings, told in the form of hilariously bad advice - advice that you might just want to take. But probably not. But maybe.

The book is divided into three parts:

The book is funny and sarcastic.  Obviously some things can't be done without getting fired but some things I think could be possible ... if nothing else for the amusement of yourself in a boring meeting and to see what you can actually get away with.

Here are some examples ... 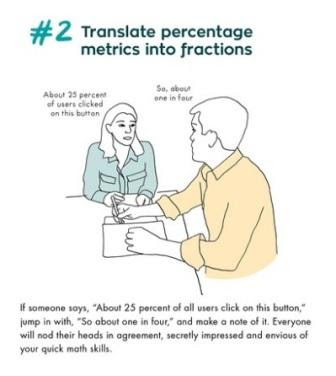 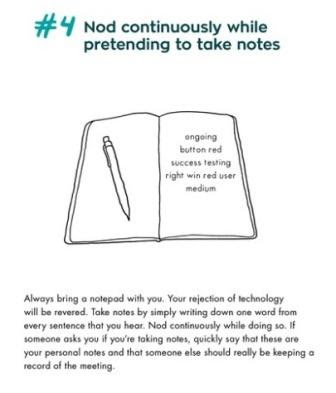 By Teena in Toronto at 1:30 pm
Email ThisBlogThis!Share to TwitterShare to FacebookShare to Pinterest
Label(s): Books, Books - 2016, Published 2016, Sarah Cooper