Book ~ "Rescuing Riley, Saving Myself: A Man and His Dog's Struggle to Find Salvation" (2013) Zachary Anderegg and Pete Nelson

From Goodreads ~ While hiking on a solo vacation in a remote, uninhabitable region of Arizona, Zachary Anderegg happened upon Riley, an emaciated puppy clinging to life, at the bottom of a 350-foot canyon.

In a daring act of humanity that trumped the deliberate savagery behind Riley’s presence in such a place, Zak single-handedly orchestrated a delicate rescue.

What didn’t come out in the initial burst of publicity this story received is that Zak and Riley’s destinies were intertwined long before they improbably found each other. For much of Zak’s childhood, he was at the bottom of a veritable canyon himself - a canyon whose imprisoning depth and darkness was created by bullies who just wouldn’t quit and parents who weren’t capable of love.

From the age of five, Zak was everyone’s favorite target. When Zak came upon Riley, the puppy’s condition bespoke his abusers’ handiwork - three shotgun pellets embedded beneath his skin, teeth turned permanently black from malnutrition.

The meeting was one of a man and a dog singularly suited to save each other. As a former U.S. Marine sergeant, Zak was one of only a few people with the mettle and physical wherewithal to get Riley out. And in rescuing him, Zak was also attempting to save himself, conquering the currents of cruelty that swelled beneath his early life and always threatened to drown him.

In June 2010, Zak was hiking in the canyons of Arizona and happened to look down and saw a puppy in a hole.  He rappelled down and found the puppy was near death ... it was obvious the puppy had been there for a while.  Zak rappelled back up, headed to a store for food and water for the puppy and returned that day, moving him onto a blanket for the night, promising to be back the next day to rescue him.


Zak managed to get the puppy out of the hole and took him to a local vet.  After a couple of days of fluids and care, the puppy was ready to leave ... and Zak took him home to be part of his family and named him Riley. 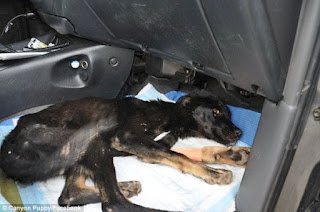 Here is a happy and healthy Riley today ... 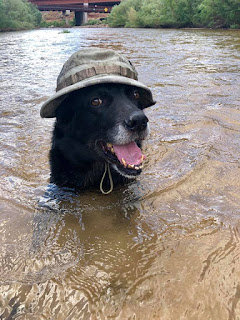 Zak assumed that someone had intentionally lowered the puppy into the hole to die.  This brought back feelings and emotions in him of when he was bullied as a child and had no one to turn to.  Despite the title of this book, this is more a story about Zak, his childhood, being bullied, his non-responsive parents and still carrying the emotional baggage than rescuing and adopting Riley.  So while an interesting story, it wasn't quite what I was expecting ... I thought it would be more about Riley than Zak.  It's obvious that Riley is doing well nine years later ... I hope Zak has found the peace and closure he has been looking for.
By Teena in Toronto at 5:33 pm
Email ThisBlogThis!Share to TwitterShare to FacebookShare to Pinterest
Label(s): Books, Books - 2019, Pete Nelson, Published 2013, Zachary Anderegg