From Goodreads ~ For eleven seasons, Marion Ross was head of one of America's favorite television households. Now meet the lovable real-life woman behind the "Happy Days" mom.

Before she was affectionately known to millions as "Mrs. C.," Marion Ross began her career as a Paramount starlet who went on to appear in nearly every major TV series of the 1950s and 1960s - including "Love, American Style", in which she donned an apron that would cinch her career. Soon after came the fateful phone call from producer Garry Marshall that made her an "overnight" success, and changed her life.

In this warm and candid memoir, filled with loving recollections from the award-winning "Happy Days" team - from break-out star Henry Winkler to Cunningham "wild child" Erin Moran - Ross shares what it was like to be a starry-eyed young girl with dreams in poor, rural Minnesota, and the resilience, sacrifices, and determination it took to make them come true. She recalls her early years in the business, being in the company of such luminaries as Humphrey Bogart, Lauren Bacall, and Noel Coward, yet always feeling the Hollywood outsider - a painful invisibility that mirrored her own childhood. She reveals the absolute joys of playing a wife and mother on TV, and the struggles of maintaining those roles in real life. But among Ross's most heart-rending recollections are those of finally finding a soulmate - another secret hope of hers made true well beyond her expectations.

Funny, poignant, and revealing - and featuring Garry Marshall's final illuminating interview - as well as a touching foreword from her "TV son" Ron Howard, and a conversation with her real-life son and daughter, Marion Ross's story is one of inspiration, persistence, and gratitude. It's also a glowing tribute to all those who fulfilled her dreams - and in turn, gave us some of the happiest days of our own lives. 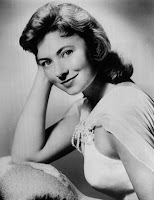 Marion Ross was born 89 years ago in Minnesota.  She always had the dream of being an actress on the stage and studied drama in school ... her name was originally spelled "Marian" but she changed the spelling when she was young because she felt "Marion" would look better on a marquee.

She met her husband, Effie, when she was still in university and they impulsively got married.  Effie didn't have a lot of ambition and it was Marion who worked and made sure everything was taken care of (she was okay with that).  Though Marion didn't realize it, Effie was an alcoholic ... everyone drank back then, though she didn't.  They eventually divorced and Marion by then had two children to take care of (Effie wasn't father material).

Marion found steady work in movies, TV shows and plays before landing the part of Marion Cunningham ("Mrs. C.") on Happy Days in 1974 until 1986.  After that show ended, she continued to work in show business.  She met the love of her life, Paul Michael, when she was in her sixties and he passed away suddenly in 2011.

I like reading bios/autobios as I'm always interested in people's stories.  I wasn't a big fan of Happy Days but watched it (as did everyone else) when it was on back in the day.  Marion seems like a nice person so I was curious to see what her story was and find out what was really going on behind the scenes.

I liked the writing style (Marion wrote this with the help of David Laurell) and she didn't reveal anything too scandalous.  She seems to be well-liked and respected.  There are interviews with various members of the Happy Days cast along with her children, Jim and Ellen, and her long-time assistant and they all had nice things to say about her.
By Teena in Toronto at 8:44 pm
Email ThisBlogThis!Share to TwitterShare to FacebookShare to Pinterest
Label(s): Books, Books - 2018, Marion Ross, Published 2018