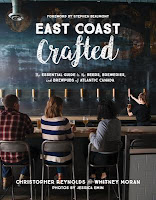 From Goodreads ~ From the pioneering breweries of historic downtown Halifax to the distinct merroir of rural Prince Edward Island, from the banks of New Brunswick’s St. John River to the far-flung iceberg alleys of Newfoundland, "East Coast Crafted" features behind-the-scenes profiles of each of Atlantic Canada’s nearly 70 breweries and brewpubs.

With a fun, narrative style, authors Christopher Reynolds (Cicerone, beer judge, co-owner, Stillwell beer bar) and Whitney Moran (beer journalist and editor) get to know the people behind the pints and offer readers dozens of recommendations as they explore their favourite suds from across the region. The result is the first comprehensive guide to Atlantic Canada’s evolving craft beer industry, an ideal read for beer tourists and local champions of Canada’s fastest-growing craft beer-producing region.

I'm originally from Nova Scotia and love beer ... so that's why this book caught my eye.

Each section/province starts with a map of the breweries covered.  There is an introduction about the history of beer in that province (for example, during Prohibition, PEI stayed dry the longest [from 1916 to 1948]).  It is then broken down into geographical areas of the province (for example, in Nova Scotia, the areas include Halifax/Dartmouth, Western N.S. & Valley, South Shore, and Northern N.S., Eastern Shore & Cape Breton).  Within the areas, breweries are listed.  The description of the breweries include their address, when they were established, information about the brewery, their backstory and beers are highlighted.  There are also interviews with those involved in the beer industry.

I liked the writing style.  I found there was just enough information about the provinces and brewers so I didn't feel overloaded.  There are lots of colourful pictures.

This book would be a great guide and handbook to use to encourage you to check out the different breweries around the Atlantic provinces.  If you lived there, it would give you a great excuse to do some fun day trips.
By Teena in Toronto at 9:46 am
Email ThisBlogThis!Share to TwitterShare to FacebookShare to Pinterest
Label(s): Books, Books - 2018, Canadian, Canadian 2018, Christopher Reynolds, Published 2017, Whitney Moran