Today and tomorrow I am attending the Canadian Pension & Benefits Institute (CPBI) conference here in Toronto.

It is a day and a half of sessions relating to retirement, investments and benefits (I work in the retirement industry).

The keynote speaker to start the conference this morning was Clara Hughes.

Clara Hughes is a Canadian cyclist and speed skater, who has won multiple Olympic medals in both sports. She is tied with Cindy Klassen as the Canadian with the most Olympic medals, with six medals total. She is one of the few athletes who have competed in both the Summer and Winter Olympic games.

Because of her success in sports and her humanitarian efforts, Hughes was named to both the Order of Manitoba and as an Officer of the Order of Canada. She is involved with Right To Play, which is an athlete-driven international humanitarian organization that uses sports to encourage the development of youth in disadvantaged areas. She has received a star on the Canadian Walk of Fame and was inducted into Canada's Sports Hall of Fame.

I had read her book, Open Heart, Open Mind, last month and enjoyed it.  I had heard her speak at another conference in 2010 so was looking forward to hearing her again.

She was sitting at a table in the front before she went on.  I approached her and introduced myself, and talked about recently reading her book, etc.  I had told her that Gord had gone to her Indigo book signing in September and she said to say hello to him.  Awwwww!

In her session, Clara talked about her life ... being an athlete, suffering from depression, etc.  She was very entertaining and motivational. 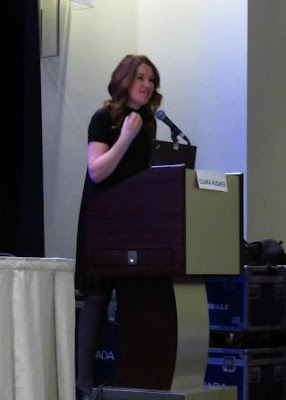 After her talk, others in the audience went up to her to talk to her ... and she didn't seem to mind.  She was so nice.
By Teena in Toronto at 11:30 am
Email ThisBlogThis!Share to TwitterShare to FacebookShare to Pinterest

She seems very down to earth and genuine. Have a good conference.

To win medals in both winter and summer games is truly an incredible accomplishment.