From Goodreads ~ A heartwarming and irresistible story of the profound bond between a deer named Dillie and the veterinarian who saved her life.

In the summer of 2004, veterinarian Melanie Butera received an unexpected patient: a three-day-old, blind, dying fawn she called Dillie. Melanie doubted the deer would survive, but with the help of her husband Steve she miraculously nursed Dillie back to health. The tenacious deer quickly became a member of the family running around the house with the dog, the cat, and the people; and enjoying all of the perks including her own bedroom, plates of her favorite linguini, and swims in the family's pool. Mischievous and funny, Dillie opens cabinets, learns to climb stairs, turns the lights on and off, steals food, and showers her family with affection. Melanie and Steve gave Dillie a chance at life, and in return she has enriched theirs beyond measure. And when Melanie is diagnosed with cancer, the veterinarian who saved the life of a fawn is herself saved by the unconditional love of Dillie the deer.

This heartwarming book is filled with insights about the animal world and the powerful bond between humans and the non-human creatures who love them. 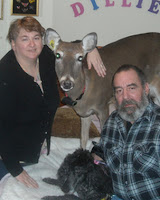 Melanie Butera is a vet in Ohio.  In 2004, a three-day-old dying farm deer was brought to her.  The fawn was one of triplets but her mother had rejected her because she was blind.  The farmer couldn't afford to pay for treatment but offered her to Melanie, who along with her husband, Steve, nursed her to health.  That fawn became Dillie.

Steve made some space for her in their barn but she was afraid of the horses they were keeping there so they temporarily moved her into the house ... and she never left.  She's now 11, has her own bedroom (though she used to sleep with Melanie, Steve, their dog and their cat ... how crowded would that bed be?!) and is housetrained.  Her fav things are fruit, ice and pasta.  She loves her fur siblings ... Willie, a dog, and Spazz, a cat. 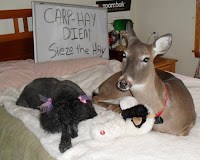 This book is about how life with Dillie began and the joy that she has brought to Melanie and Steve (and others).  She also talks about the animals she encountered in her vet clinic.

Melanie started writing the book after she found out she had cancer and she wanted everyone to know she was there ... this was her legacy.

I hadn't heard of Dillie before I read this book but now I'm a fan!  It caught my eye because it was the true story about an animal.  I liked the writing style ... I found it conversational.  It is written in first person perspective from Melanie's point of view.  Obviously Melanie and Steve have big hearts!

I enjoyed this book and would recommend it to all animal lovers!

Here is the live DillieCam ...

By Teena in Toronto at 8:43 pm
Email ThisBlogThis!Share to TwitterShare to FacebookShare to Pinterest
Label(s): Books, Books - 2015, Melanie Butera, Published 2015