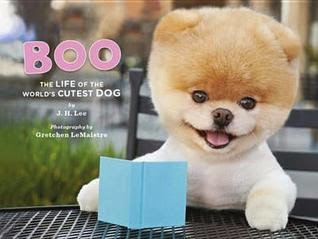 From Goodreads ~ Everyone loves Boo!

His signature fluffy head and teddy bear like persona are irresistibly adorable. With nearly a million Facebook fans, and adding more each day, Boo is poised to become an international superstar.

This charming book features exclusive new photographs of Boo doing all his favorite things: lounging around, playing with friends, exploring the whole wide world, and making those famous puppy-dog eyes. To know Boo is to love him, and this book is for anyone who loves the cutest dog ever.

I've never heard of Boo but what caught my eye was that it was a book about a dog ... and I love dogs!

Boo is a Pomeranian that became an Internet sensation. Known for his short haircut, he has a popular Facebook page and is the subject of four photo books (including this one).  He belongs to a San Francisco-based Facebook employee who created a Facebook page for the dog with a statement "My name is Boo. I am a dog. Life is good." He became popular in October 2010 after singer Ke$ha sent a tweet that she had a new boyfriend, linking to the page, and Khloé Kardashian called him the "cutest dog on the planet".

It's a cute book.  The pictures are great and show Boo and his life.
By Teena in Toronto at 12:30 pm
Email ThisBlogThis!Share to TwitterShare to FacebookShare to Pinterest
Label(s): Books, Books - 2014, J.H. Lee, Published 2011