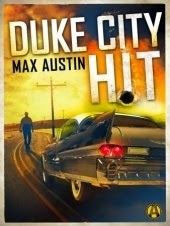 From Goodreads ~ According to Vic Walters, the secret to happiness is low overhead and few demands. Living rent-free in a modest bachelor pad behind his boss’s house, he has no debts, no entanglements and no expensive relationships. He works just a few days a month but his bank accounts keep growing.

Vic is a high-priced hitman with a legendary record of success. That is, until someone starts eliminating his marks before he can get to them ... until his manager puts him in the middle of a vicious drug-cartel feud ... and until a young man walks into his life with a big .45 and a startling revelation.

For Vic Walters, it’s time to step out of the shadows. Which means it’s killing time in Duke City,

Vic is in his fifties and he used to be a bounty hunter ... until he found he had a talent for being a hitman.  His life is very structured ... he has a rotating set of charcoal grey suits (one to wear, one in the closet and one at the dry cleaners), he eats all of his meals in restaurants because he doesn't like to cook and he has no close friends or relatives.  One day out of the blue Ryan walks into his life wanting Vic to teach him all he knows.  Vic's dilemma is to take him under his wing or get rid of him since Ryan knows so much about his occupation.

This is the second book I've read by this author and I really enjoyed it.  I liked the writing style and thought it flowed very well.  The story was interesting and I kept wanting to read more to see what was going to happen.  It's written in third person perspective, with a focus on whoever and whatever was happening at the time.  I liked the interaction between Vic and Ryan.  As a head's up, there is swearing and violence.

I would recommend this book and look forward to reading more from this author!

By Teena in Toronto at 12:01 am
Email ThisBlogThis!Share to TwitterShare to FacebookShare to Pinterest
Label(s): Books, Books - 2014, Max Austin, Published 2014

Thanks for the kind words!

I'm glad you enjoyed this one! Thanks for being a part of the tour!