Book ~ "Fixing Freddie: A True Story about a Boy, a Single Mom, and the Very Bad Beagle Who Saved Them" (2010) Paula Munier 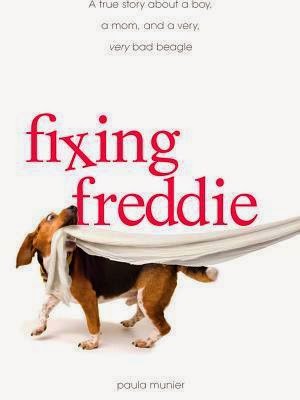 From Goodreads ~ We didn’t need a dog. We had a perfectly nice dog named Shakespeare, a big, loveable, huggable shaggy black mutt from the pound. And a cat, a beautiful tabby named Isis. We were a family - me and the dog and the cat and Mikey, my youngest child and the only one left at home. His siblings were grown and gone. His father was just gone. When I finally scraped up the money to buy a little house, Mikey reminded me that it was time for the puppy.

“What puppy?” I didn’t do puppies.

“‘When we get a home of our own,’ you said. You promised,” insisted Mikey.

You promised - the two words in the English language most likely to bring a single mother to her knees.

In this hilarious and heartwarming memoir, single mother Paula Munier takes on the world's worst beagle - and loses every time. She tries everything to fix Freddie - but nothing really works. As her youngest son grows up and prepares to leave her soon-to-be empty nest, Paula's worst fear is that after more than thirty years of raising kids, she'll be left all alone - with Freddie.

I love reading stories about dogs and that's why this book caught my attention.  But it turns out that it was less about Freddie, the beagle, and more about the author and her quest to find a husband.

Paula has been divorced twice and has three children ... two are older and live on their own (their father is loser husband #1) and Mikey is a pre-teen (his father is loser husband #2) when the book begins ... and she keeps attracting and falling for losers.  When Paula buys a house on a lake and she and Mikey settle in, Mikey reminds her of her promise that she would get him a dog once they have their own house.  So despite already having a big dog and a cat off they go and they come home with Freddie, a six-month-old beagle pup.  Over the years, Freddie has discipline issues ... he would lunge at and try to attack men.

While I liked the writing style, I didn't connect with the characters.  I found Paula a bit sad and needy because she was always on the hunt for husband #3 and was always lamenting about her failed love life and past relationships.  I didn't find Mikey likeable ... he was spoiled and Paula gave him what he wanted even when she couldn't afford it.  He demanded a dog so she got him a dog.  When he was 16, he wanted an iphone so she got him an iphone (she had to approach his father to pay for half).

I found Paula irresponsible in getting a dog she knew nothing about.  She is a book editor so has access to and knowledge of the Internet.  They should have done some research to find which would be the appropriate dog for them instead of impulsively buying Freddie and then figuring it out.  Freddie was about five when she finally figured out how to train him ... I felt bad for Freddie.
By Teena in Toronto at 6:28 pm
Email ThisBlogThis!Share to TwitterShare to FacebookShare to Pinterest
Label(s): Books, Books - 2014, Paula Munier, Published 2010