Cursing the A-hole who broke into our car 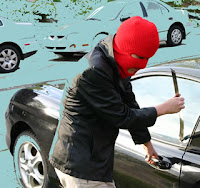 Our car was broken into last night. It was parked in our spot in the parking lot behind the buildings on the condo property. It's the first time it's happened to us.

One of our neighbours, Don, knocked on our door about 8:30pm to let us know.

I went out to check it out and sure enough someone had smashed the front passenger window.

The dash storage was open as was the console between the two seats.

We don't keep anything of value in the car as there have been break-ins in the past. All that was stolen was our GPS which was in the console storage. The cable plug-in for it was left, though. Huh?!

I called the police right away to report it. Since it was such a small crime, they didn't come out to check or take fingerprints. But at least it's on record in case it happens again in the 'hood.

Gord found a company who replaced the window this afternoon. They came to the car in our parking lot and replaced it there. Plus they vacuumed all the broken glass from that side of the car.

Our deductible is $300. To replace the window was $300. It didn't make sense to put it through our insurance so we had to suck it up along with the cost to replace the GPS.
By Teena in Toronto at 2:16 pm
Email ThisBlogThis!Share to TwitterShare to FacebookShare to Pinterest

Sorry about your car. Lots of cars in Seattle are broken into, but it's not happened to me yet. Have a great weekend.

Thats is such a huge drag. My Bro-in-laws truck wasstolen this week in Regina. They found it very quickly but it was damaged beyond it's value so they won't be getting it fixed.

ugh. So glad they didn't take the car. But it's still a pain.

I've been a victim of crime more times than I care to recall and it makes me so mad that there are such low life's out there, everywhere in this world. :((

How terrible, so not fair what it costs us when we are the victims of a crime. Deductibles are so stupid, I think. Do we not pay enough for basic insurance without that?
Hugs, Cindy

Oh that sucks. It is beyond my understanding that people think they can take what does not belong to them, and geez - do damage besides!

That sucks. Hopefully the creep gets caught.