Crumpet, one of our cats, likes to sleep on cushions on the chairs under our table. The cushions are black and attract fur so I've put towels on the cushions. Recently I knitted her a blanket to replace the towel on the floor in the hallway where she likes to sleep (a success!) and a blanket for their window perch (a success with Muffin but Crumpet hasn’t checked it out yet). I thought I'd make a cat blanket to replace the towel on her favourite chair. 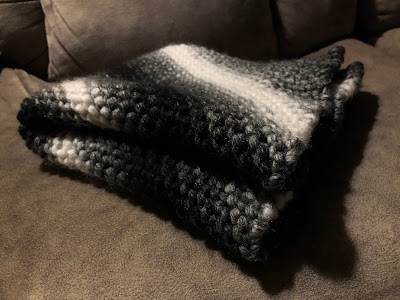 About five minutes after I put it on the cushion on the chair, Crumpet jumped up, cleaned herself and then went to sleep.  So I'd say it's a success! 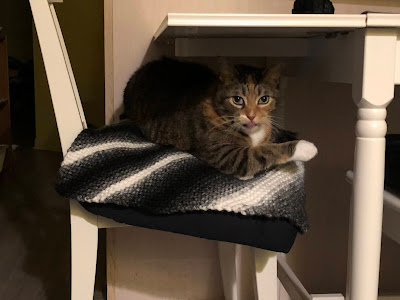 I used a skein of Braid Big (Salt and Pepper) by Loops & Threads for it.  The recommended needle size is 12.75mm but I used 8mm and it seemed to be okay.  I've never used it before and I like it.

By Teena in Toronto at 10:36 pm
Email ThisBlogThis!Share to TwitterShare to FacebookShare to Pinterest
Label(s): Knitting