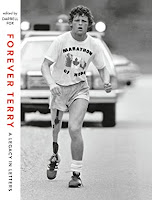 From Goodreads ~ Terry Fox defined perseverance and hope for a generation of Canadians. Forty years after Terry's run ended, "Forever Terry" reflects what Terry's legacy means to us now and in the future.

To mark the 40th anniversary of the Marathon of Hope, "Forever Terry: A Legacy in Letters" recounts the inspiration, dedication and perseverance that Terry Fox embodied and gives voice to an icon whose example spoke much louder than his words.

Comprising 40 letters from 40 contributors, and edited by Terry's younger brother Darrell on behalf of the Fox family, "Forever Terry" pays tribute to Terry's legacy, as seen through the eyes of celebrated Canadians ranging from Margaret Atwood, Bobby Orr, Perdita Felicien, Jann Arden, and Christine Sinclair, to those who accompanied Terry on his run, Terry Fox Run organizers, participants, supporters, and cancer champions. Appearing alongside never-before-seen photos of their hero, their reflections reveal connections that readers would never have expected, and offer a glimpse into the way goodness and greatness inspire more of the same.

"Forever Terry" is a testament to the influence one brave man has had on the shape of Canadian dreams, ambitions, and commitment to helping others. Author proceeds support the Terry Fox Foundation, which has raised over $800 million for cancer research. 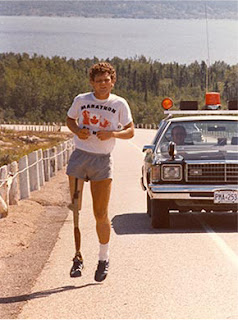 On April 12, 1980, Terry began the Marathon of Hope, a cross-country run to raise money for cancer research.  He hoped to raise one dollar from each of Canada's 24 million people.  He began in St. John's, NF, in April and ran the equivalent of a full marathon every day.  On September 1, 1980, he was forced to end his run outside Thunder Bay because the cancer had spread to his lungs.  He headed home to BC immediately to begin treatment and passed away in June 1981.

I was 17, in grade twelve and living in Sydney, Nova Scotia, when Terry started his Marathon of Hope.  Though he came through Sydney in the beginning of May after making his way through Newfoundland, I don't have any recollection of that, which I think is strange and sad considering what a big deal it is ... but it didn't really start picking up steam until he got out of the Maritimes.

One of Terry's earliest supporters was Isadore Sharp, founder of the Four Seasons Hotels, who proposed an annual fundraising run in Terry's name.  Terry agreed but insisted that the runs be non-competitive.  The first Terry Fox Run was on on September 13, 1981 ... over 300,000 people took part and raised $3.5 million.  The Run has grown to involve millions of participants in over 60 countries and is now the world's largest one-day fundraiser for cancer research ... about $800 million has been raised.

Though the run is virtual this year because of Covid, it's still on on September 20!  This is my third year as a volunteer/organizer of our local one. 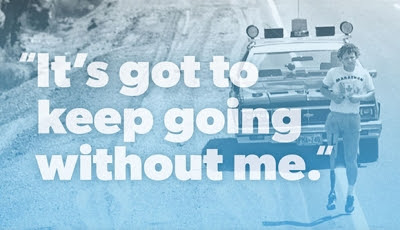