I was craving pizza for supper this evening.  I was walking along College Street and came across Trattoria Taverniti (east of Grace Street).  It looked interesting and I'd never been there so I thought I'd check it out.

When I got here around 6:30pm, it was fairly empty but filled up pretty quickly. 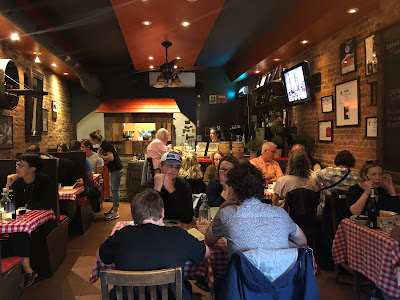 I ordered the Carne pizza.  It was a good pizza and I ended up taking some home for lunch tomorrow.  The crust was crispy and I guess it was the sausage that had a bit of a bite. 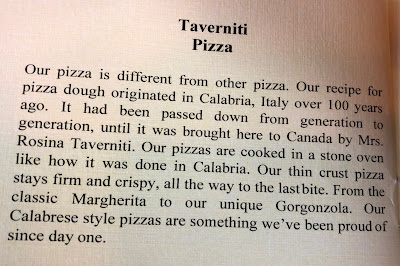 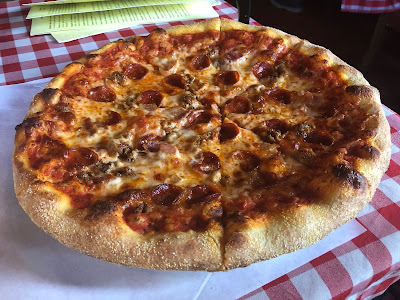 I paid my bill and was finishing up my wine, getting ready to go.  Then one of the servers asked if I would move to the patio to a high top chair because they needed my table.  I said I wasn't going to be much longer and didn't want to move to a high top (I have a wonky knee).  About ten seconds later, the second server came over and asked me to move and I told her the same thing.  About five minutes later, one of the servers said I really had to leave because they really needed my table.  I just had a bit of wine left and again said I'd be leaving shortly (and did).  I felt a bit uncomfortable because the table next to mine was looking over and wondering what was going on.

So what started out being a pleasant meal got ruined.  I understand that a small restaurant needs to turn the tables over to make money.  But if the table was reserved and I needed to be gone by 7:30pm (so in about an hour), they should have said so when I was seated so the expectations were set ... rather than kicking me out because someone else needed the table.  Definitely a customer service fail.  As good as the pizza was, I didn't feel valued as a customer so won't be back.

By Teena in Toronto at 7:40 pm
Email ThisBlogThis!Share to TwitterShare to FacebookShare to Pinterest
Label(s): Trattoria Taverniti Toronto ON