Gord and I saw Cole Porter's Anything Goes tonight.

Young Wall Street broker Billy Crocker arrives at the docks to bid adieu to his boss Elisha J. Whitney and nightclub singer, Reno Sweeney, as they board the London-bound S.S. American.

For the second time, though, Billy unexpectedly crosses paths with the beautiful Hope Harcourt, whom he rode in a taxi with earlier. Determined to win her away from her fiancé, the stuffy Sir Evelyn Oakleigh, Billy gets the bright idea to stow away on the ship. Through a series of schemes concocted by Reno and hapless gangster “Moonface” Martin, Billy may just woo his lady love before the vessel reaches London, or he may end up in the brig.

With an original 1934 songbook constructed by beloved composer Cole Porter, Anything Goes introduced a slew of tunes still recognizable to this day. The jaunty score barrels through such standbys as “I Get a Kick Out of You” and “You’re the Top”—songs that have been recorded several times over by everyone from Frank Sinatra to Louis Armstrong and Barbra Streisand.

It's playing at the Lower Ossington Theatre (Ossington/north of Queen) until March 20.  I like this theatre because it's small (it holds about 140 people) so you're not too far from the actors.  Our seats were in the front row so the actors were inches in front of us. 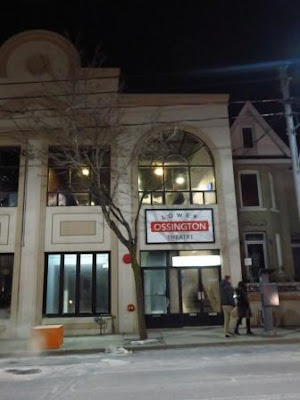 This is the fourth play we've seen there.  They've all been excellent, including this one!  There was lots of singing and dancing ... there's humour ... and there's a happy ending.

At one point, Moonface Martin and Reno Sweeney, who are old friends, are singing and dancing.  The dress on Chelsey MacLean, who was playing Reno, came undone at the back.  As she was singing and dancing, she was trying to refasten her dress.  Thomas James Finn, who played Moonface, tried to help her to no avail and even made a comment about how she's falling apart.  It was funny, improvised and the audience loved it.  Ironically the song they were singing was called Friendship.

The actors, dancers and singers were all very good.  Chesley MacLean as Reno was seductive, as was Emma Gibney as Erma.  Standouts for me were Thomas James Finn as Moonface Martin and Kevin Doe as Lord Evelyn Oakleigh.
By Teena in Toronto at 10:30 pm
Email ThisBlogThis!Share to TwitterShare to FacebookShare to Pinterest
Label(s): Live theatre, Live theatre: Lower Ossington Theatre