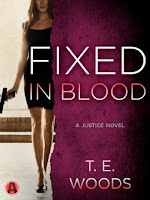 From Goodreads ~ Seattle Chief of Detectives Mort Grant is still reeling from losing his daughter - again. When Allie first walked back into his life, breaking years of silence, he could hardly believe his luck. And after hearing her story, Mort tried to do everything in his power to keep her safe. The only person he trusted with Allie’s life was The Fixer. But, for the first time, The Fixer let him down.

Now Mort has been called in on a gruesome murder case: a beautiful young woman found in a ravine, her body riddled with stab wounds. Within twenty-four hours, the police uncover a snuff film depicting her murder, the killer’s face always just out of shot. When a second body and video are discovered, Mort knows this is no ordinary case.

From a chain of sleazy payday loan shops to the dark underworld of the sex-slave trade, Mort’s chasing a twisted menace to hell and back. But he’s not the only one. Once again, The Fixer is on the hunt - and she’s desperate to make things right.

A young woman is found murdered and Chief of Detectives Mort Grant is on the case.  They then discover a snuff film showing her murder online.  Then it happens to another young woman.  The link between them is they owe money to the same payday loan shop so that's where Mort focuses.

Lydia has a busy caseload and when one of her patients goes missing, she and Mort discover that she too owes money to the same payday loan shop.  Working together, they try to solve the murder of the two women and find Lydia's patient before she becomes the third victim.

In the meantime, Mort is worried about his daughter, Allie, who has disappeared again and is rumoured to be living with a Russian drug lord in London.

This is the fourth book I've read by this author and the fourth in the Mort Grant series (I've read all four) ... I enjoyed it.  Though it is part of a series, it can be read as a stand alone as there is enough information provided. It's written in third person perspective and I liked the writing style. As a head's up, there is swearing, violence and adult activity.

Mort and Lydia are likeable.  Mort insists on running the investigation legally and according to the books whereas Lydia, as "The Fixer, a former assassin, would rather do things her way.

I look forward to reading more in the this series.
By Teena in Toronto at 5:30 pm
Email ThisBlogThis!Share to TwitterShare to FacebookShare to Pinterest
Label(s): Books, Books - 2015, Published 2015, T.E. Woods