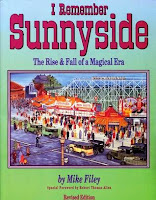 From Goodreads ~ First published in 1982, "I Remember Sunnyside" is a mine of golden memories, bringing back to life an earlier Toronto, only hints of which remain today.

Like the city itself, Sunnyside was an everchanging landscape from its heady opening days in the early 1920s to its final sad demolition in the 1950s.

The book captures the spirit of the best of times a magical era which can only be recaptured in memory and photographs. It also presents the reality of a newer Toronto where change, although necessary, is sometimes regrettable.

There are a few things I wish I could go back in time to experience and one of them is Sunnyside Amusement Park, which is the focus of this book along with the a history of the neighbourhood.

Sunnyside Amusement Park was a popular amusement park in Toronto that ran from 1922 to 1955.  It was demolished in 1955 to make way for the building of the Gardiner Expressway. It was located on the Lake Ontario waterfront at the foot of Roncesvalles Avenue, west of downtown Toronto.  Only the Sunnyside Pool and Bathing Pavilion and the Palais Royale buildings survive today.

The park was popular for its large roller coaster, known as the "Flyer", several merry-go-rounds, the Derby Racer steeplechase ride and numerous smaller attractions. It also hosted several stunt events including flagpole sitting, famous boat burnings in Lake Ontario and fireworks displays. Other popular attractions included outdoor and indoor musical concerts, night clubs, and restaurants and walking along the boardwalk.  There was even a Sunnyside train station nearby at the intersection of King Street W, Queen Street W and Roncesvalles Avenue which operated passenger service from 1910 until 1971 (it's now a park). 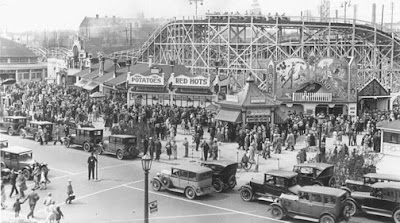 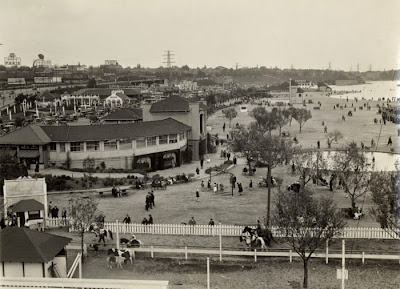 Mike Filey had a column in the Toronto Sun for about 30 years and I read it for many years (I like learning about the history of Toronto).  I've read all his books where he compiles some of his columns.

Even though it was originally published in 1982 and reprinted in 1996, it was an interesting book because the pictures of older Toronto were great. If you live in Toronto or are from Toronto, you should check it out.
By Teena in Toronto at 3:00 pm
Email ThisBlogThis!Share to TwitterShare to FacebookShare to Pinterest
Label(s): Books, Books - 2015, Canadian, Mike Filey, Published 1996, The Canadian Book Challenge 8