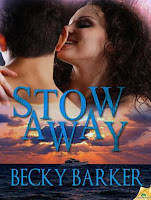 From Goodreads ~ He’s handsome, hot, hunted and hurt … a plea for help from this detective is one her heart can’t refuse.

Keri Merritt desperately needs her long-overdue vacation, preferably as far as she can get from anyone with a badge. It’s not that she doesn’t respect those modern knights, but between her job as a trauma nurse and her overprotective law enforcement family, she’s overrun.

When she finds something in the back of her truck she definitely didn’t pack, all hope of a peaceful break from reality burns away in the heat of a dark, fevered gaze. Behind those chocolate eyes lies everything she wants to avoid.

Nick Lamanto is in trouble. He’s tracked the mastermind of a gunrunning operation from Florida to Tennessee, only to wind up with an attempted murder warrant hanging over his head, a bullet in his arm and no one he can trust. Except the sheriff’s petite, strong-willed daughter, whose jittery finger is on the trigger of the .45 pointed between his eyes.

Lucky for Nick, Keri’s healing instinct kicks in. And so does a powerful attraction sharper than the needle with which she stitches him. As the threads of his investigation connect with unanswered questions about Keri’s past, keeping her safe matters more to him than his next breath. Even if it’s his last ...

Product Warnings - If you have a weakness for dark-haired, dark-eyed law enforcement officers with strong protective instincts, prepare to lose your heart.

Keri is a nurse who desperately needs a vacation.  Nick is a cop who, while working undercover, got shot.  It is suspected that he has gone rogue so he has to get out of town quickly.  Unbeknownst to Keri, Nick hides in the back of her SUV as she heads up to the family cottage for two weeks.  As she nurses him back to to health, they get to know and trust each other.  With Keri's help, he continues to investigate what brought him to Tennessee, which was a terrorist plot.

This book read like a racy Harlequin Romance with some mystery and cop drama.  Despite this (I like more substance than a Harlequin), I enjoyed the writing style and the characters.  The leads (Keri and Nick) were strong but I found the villains a bit weak ... there wasn't a lot of time spent developing their characters.  Though everything happened quickly, I found the interactions between Keri and Nick believable.


I would never have read this book based on the cover ... it's not indicative of the story.  Looking at it, you assume it's just a romance.  What the terrorist part?  And it makes it seem like someone was stowed away on a boat when, in fact, Nick had stowed away in Keri's SUV.

I enjoyed this book.  It is the first one I've read by this author and I will check out others by her.
By Teena in Toronto at 4:19 pm
Email ThisBlogThis!Share to TwitterShare to FacebookShare to Pinterest
Label(s): Becky Barker, Books, Books - 2012, Published 2011

Popping in to say Happy Labour Day! and Happy belated birthday to your furbaby! I always enjoy your review on books!!! xo HHL