From Simon & Schuster ~ Bestselling author Robert Rotenberg is back with his next razor-sharp legal thriller. Rotenberg's insider knowledge of the behind-the-scenes courtroom machinations and his mesmerizing trial scenes make this another scorching page-turner.

On the morning that his headline-grabbing divorce trial is set to begin, Terrance Wyler, youngest son of the Wyler Food dynasty, is found stabbed to death in the kitchen of his million-dollar home. Detective Ari Greene arrives minutes before the press and finds Wyler's four-year-old son asleep upstairs. When Wyler's ex-wife, a strange beauty named Samantha, shows up at her lawyer's office with a bloody knife, it looks as if the case is over.

But Greene soon discovers the Wyler family has secrets they'd like to keep hidden, and they're not the only ones. If there's one thing Greene knows, it's that the truth is never simple.

I had read Rotenberg's first novel, Old City Hall, in January and enjoyed it.

In February I was asked to review The Guilty Plea (it goes on sale on May 3, 2011) and participate in his Guilty Plea blogger tour. It gave me the chance to read Rotenberg's new book in addition to submitting questions for him to answer.

The story is in Toronto and, like the first book, I am very familiar with the locations where action takes place. In fact, I live near the hotel where Terrance Wyler's girlfriend, April, "stayed". Check out foursquare if you want to see the Toronto spots used in the book.

I enjoyed the writing style of this book. It's fast-paced and doesn't drag.

It was a nice surprise to some of the characters had been brought back from the first novel like Ari Greene, Jennifer Raglan and Jo Summers ... you get to know them even more.

Here are the some of things I was curious about and the author's responses:
I enjoyed this book and look forward to more from this author!

If you want to meet Robert Rotenberg, he's going to be at Indigo in the Eaton Centre on May 6 at 1pm. 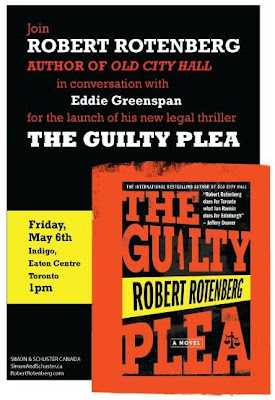 I received a copy of this ebook at no charge in exchange for my honest review.
By Teena in Toronto at 12:01 am
Email ThisBlogThis!Share to TwitterShare to FacebookShare to Pinterest
Label(s): Books, Books - 2011, Canadian, Published 2011, Robert Rotenberg, The Canadian Book Challenge 4

This sounds good! I'll put it on my list. thanks.