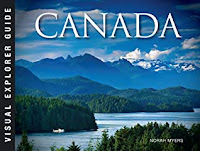 From Goodreads ~ When you think of Canada, do you picture the awe-inspiring magnificence of the Rocky Mountains, the sprawling metropolis of Toronto, or the vast expanse of the northern territories? Or do moose, dogsledding, and maple syrup spring to mind?

This fascinating exploration of the world’s second-largest country extends from Churchill, Manitoba (the “Polar bear capital of the world”) to Vieux Montreal to Vancouver beaches.

Packed with more than 200 spectacular photographs, presented in a handy pocket-sized landscape format, and with expert commentary for both armchair and prospective tourists, Canada captures the breathtaking beauty of this large and varied country.

As a Canadian, born in Nova Scotia, living in Toronto for more than 30 years and doing a fair bit of travelling for my job, I thought it would be fun to read about Canada, especially with Canada Day being less than a week away.

This book is not only a collection of full-colour pictures but also interesting facts to go along with the pictures.

The book is split into five sections:

Here are a couple things I found odd with this book.  While the author states that Ontario and Quebec are Canada's two largest and most populated provinces, she lumps them together into one section.  Being the largest provinces, I would have thought that they would have warranted their own sections, especially given how different Quebec is in many respects from the rest of Canada.  Yet, British Columbia got its own section?!

Another thing I found odd was some of the choices of pictures.  There is a picture of a bull moose in the Atlantic Region section, for example, but no specific location provided in the picture's description, just that they are found in most of Canada.  Is this an Atlantic bull moose?  So a general picture of a bull moose was included but where were the pictures of Peggy's Cove or the Cabot Trail?
By Teena in Toronto at 8:30 am
Email ThisBlogThis!Share to TwitterShare to FacebookShare to Pinterest
Label(s): Books, Books - 2020, Canadian, Canadian 2020, Norah Myers