About six years ago, I hadn't been sleeping well for a couple of years.  It would either take me a long time (a couple hours) to get to sleep or I'd wake up in the middle of the night wide awake (sometimes for hours).  Needless to say, I was tired all the time and my energy level was low.

I was tired of being tired so my doctor referred me to a sleep doctor at St. Mike's.  He had me do an overnight sleep test there in March 2014 ... the results showed that I have sleep apnea.  It's normal to stop breathing about five times an hour.  I stopped breathing an average of 44 times an hour and it was worse when I was in a "dream" state.  No wonder I was so tired ... I wasn't getting a good restful sleep!  I got fitted with a CPAP (continuous positive airway pressure) machine and I was able to sleep better right away.

No surprise that CPAP machines aren't made to last forever.  I found in the last while I've been tired again and I wanted to get a new CPAP machine ... but to do that you need a recent prescription.  I saw my sleep doctor in June 2019 and he suggested I do an overnight sleep test again.  The first available appointment was March 2020!  There are six sleep labs and until last year they were running every night.  But with provincial cutbacks, they only run four nights away week ... hence the longer wait.

I  called yesterday to confirm my March appointment and was told there was a cancellation and could I go in last night?  Yes! 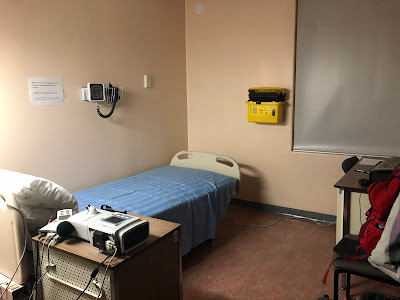 Maria was my tech and she was great ... she was friendly and answered all my many questions.  She got me wired up and ready to go ... six on the face, nine on the back of the head, one on the neck, two on each shin and straps on the chest and stomach (to monitor breathing).


"Curfew" is 11pm.  I let Maria know about 10:30pm by ringing the buzzer that I was ready to go sleep.  She came in and put an oxygen sensor on my finger, a mask on my nose, turned off the lights and turned all the monitoring on.  In addition, there is a camera in the room so she could watch me.  If I needed to go to the bathroom, I would have had to ring the buzzer to let Maria know so she could unhook me so I could get out of bed and then hook me back up again.  I kept my water intake minimal so I wouldn't have to go put Maria and myself through all that.

Despite being in a strange bed and having many wires attached, it didn't take me too long to get to sleep ... maybe 20 minutes.  I woke up briefly a couple times during the night and had some weird dreams!

Maria woke me up about 5:45am (you have to leave by 6am).  She said the pressure on my CPAP machine is too low and adjusted it.  It will be interesting to see if I can tell the difference tonight.  Before I left, I had to complete a questionnaire re how much sleep I think I got, did I dream, was it a restful sleep, etc.  I have an appointment to see the sleep doctor in the middle of February.

I'd driven to the hospital and was home in my own bed with Gord and the kitties by 6:30am.  It took me a bit to get to sleep and I stayed asleep until 8:30ish. 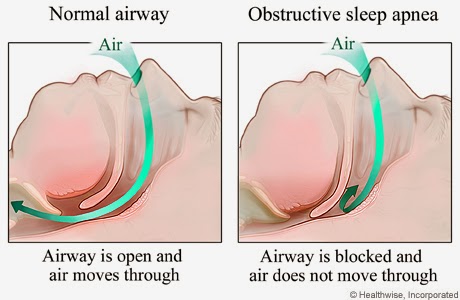 Sleep apnea affects the way you breathe when you’re sleeping, jolting you out of your natural sleep rhythm. So you spend more time in light sleep and less time in the deep, restorative sleep you need to be energetic, mentally sharp and productive the next day.

Signs and symptoms of sleep apnea:

You have a higher risk for sleep apnea:

By Teena in Toronto at 9:30 am
Email ThisBlogThis!Share to TwitterShare to FacebookShare to Pinterest

My dad has sleep apnea. He calls it lack-of-nap-aphobia. Hope the adjustment helps.

Ha! I hope the adjustment helps too!