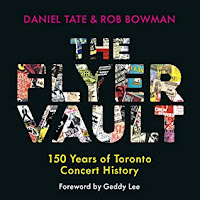 From Goodreads ~ Duke Ellington. Johnny Cash. David Bowie. Nirvana. Bob Marley. Wu-Tang Clan. Daft Punk. These are just some of the legendary names that played Toronto over the last century.

Drawing from Daniel Tate’s extensive flyer collection, first archived on his Flyer Vault Instagram account, Tate and Rob Bowman have assembled a time capsule that captures a mesmerizing history of Toronto concert and club life, ​running the gamut of genres from vaudeville to rock, jazz to hip-hop, blues to electronica, and punk to country.

"The Flyer Vault: 150 Years of Toronto Concert History" traces seminal live music moments in the city, including James Brown’s debut performance in the middle of a city-wide blackout, a then-unknown Jimi Hendrix backing up Wilson Pickett in 1966 - the year a new band from London named Led Zeppelin performed in Toronto six times - and the one and only show by the Notorious B.I.G., which almost caused a riot in the winter of 1995.

Complementing the book’s flyers is the story of the music, highlighting such iconic venues as Massey Hall, the Concert Hall/Rock Pile/Club 888, and the BamBoo, alongside lesser-known but equally important clubs such as Industry Nightclub and the Edge.

In 2015, Daniel Tate rediscovered a bunch of old Toronto hip hop concert and rave flyers he'd collected over the years.  He started posting them to Instagram and people started noticing.  He connected with Rob Bowman re flyers for specific shows 1969 and 1970.  They started chatting and decided to create a book with images of Daniel's image and Rob's musical background knowledge would be a great idea.  They narrowed Daniel's 8,000 images down to the about 170 images that are included in the book.  They also decided to use the year 2000 as the cut-off date.  They tended to focus on debut performances by artists and shows that for whatever reason were "exceptional".

The map shows over 200 club and concert venues that span a century.

Performances and what was going on at the time are discussed at a high level.  The first performance mentioned is Swedish soprano Jenny Lind who appeared at St. Lawrence Hall in October 1851.  The chapters cover a wide variety of topics, genres and venues (the focus is more on the early years) and include:
I moved to Toronto in February 1987 and went to a lot of bars and clubs to hear live music and concerts so was familiar with most of the venues discussed in that time period.  I hadn't been to any of the shows they discussed even though I was into that kind of music.  I found myself stopping and Googling the venues I'd never heard of wondering where they used to be.  Many are long torn down with shiny buildings in their places.  Or if it was a place I'd heard of and/or been to, I'd Google to see whatever happened to it.  Throughout the book are flyers promoting many acts that came to Toronto.  I found it amusing to see that many said "live" or "live in person".
By Teena in Toronto at 11:00 pm
Email ThisBlogThis!Share to TwitterShare to FacebookShare to Pinterest
Label(s): Books, Books - 2020, Canadian, Canadian 2020, Daniel Tate, Published 2019, Rob Bowman