Gord and I live in a condo that is about 20 years old.  When it was being built, Kitec piping was very popular and that's what we had in our place.  It has since been discovered that the piping corrodes and it's no longer being sold.  In fact, there is a class-action lawsuit happening.  It's not going to be a small leak when it fails ... it will catastrophically explode.

I'm on our condo board and we spent two years deciding what to do.  Do we wait and see what happens?  If there is a leak, though, it would affect many units because of flooding.  The fact that we have Kitec piping is on the status certificates, thereby making our condos perhaps less desirable to buy.

As a board, we decided to have the Kitec piping replaced and all units had to have it done (we gave everyone lots of notice).  The corporation would be responsible for the cost of replacing it in the common elements and unit owners would have to pay to have it removed and replaced from their units.  The cost averaged about $4,500 per unit because it was done as a bulk project (it would cost up to $10,000 to do it on your own).  The project started in April and was pretty well finished by June.

Our turn was in June.  Many holes were made in our walls, bulkheads and ceilings to remove and replace the piping.  You could have the holes repaired on your own or pay extra to have them done as part of the project, which Gord and I did. 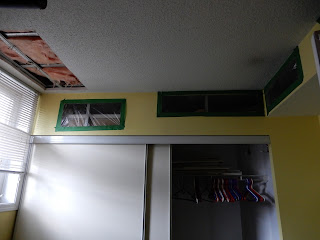 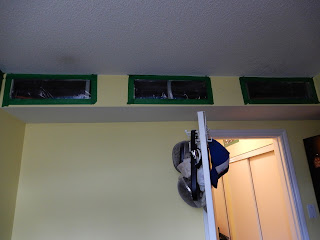 If you had your own colour-matched paint, that's what they would use.  Otherwise, you got "builder white".  Gord and I hadn't painted in about 12 years so didn't have any paint so ended up with builder white patches all over.  After 12 years, the paint probably wouldn't have matched anyway. 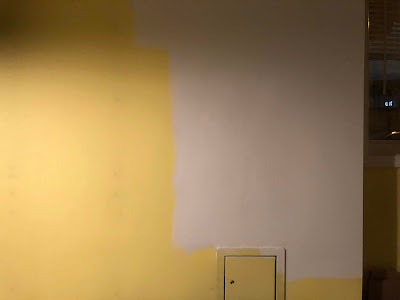 The time came when we had to pack.  Our place is small so there isn't a lot of space for boxes and shifting things around. 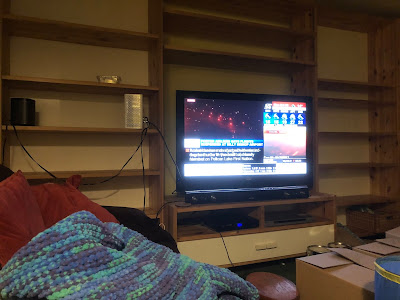 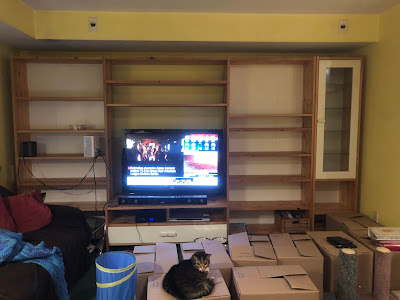 Then Gaetan and his brother, Bruno, started painting. 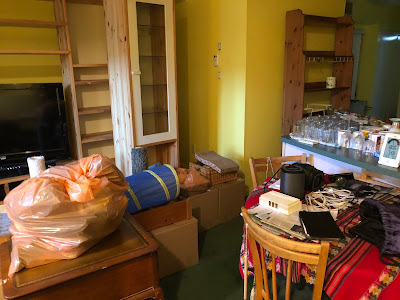 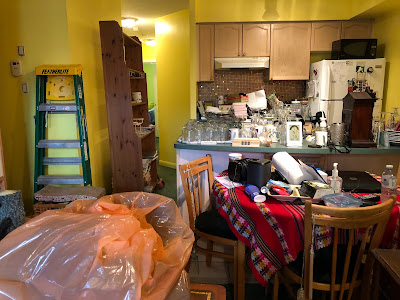 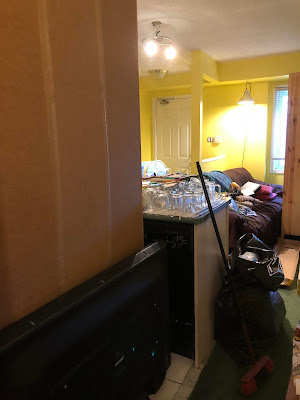 It was exciting when the gross carpeting was ripped up and the flooring was put down. 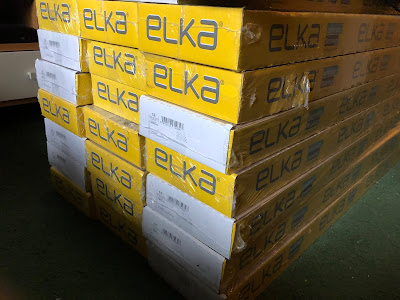 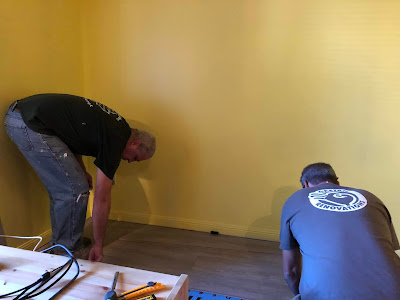 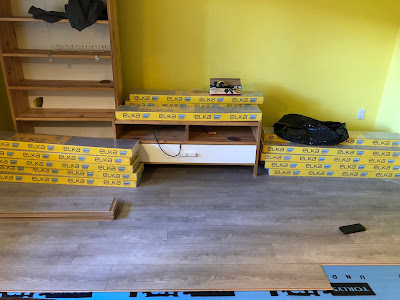 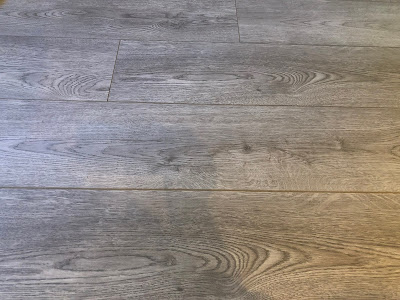 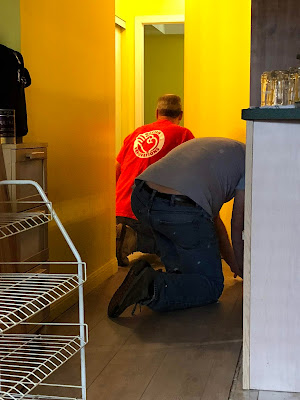 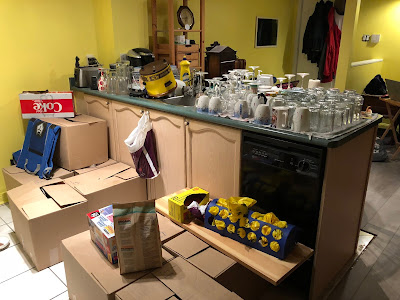 It was chaos for a week or so but worth it!  It gave us a chance to throw out some stuff (like about 30+ mugs we'd gotten at beer festivals over the years but never use!).

Gaetan and Bruno did a fabulous job and we are very happy ... thanks, Dawn!  The living room/kitchen/dining room, hallway and spare room were yellow and are now "Lemon Peel". 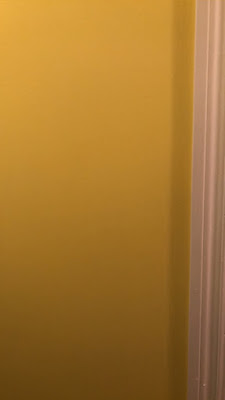 Our bedroom was a light green and is now "Raindrops". 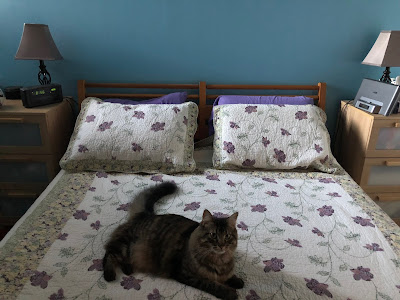 Our bathroom was tangerine and is now "Orange You Happy?"  The first picture is before.  Byron, a cat we had, loved to spring up and scrape his claws down the door frame.  This was like this for about ten years. 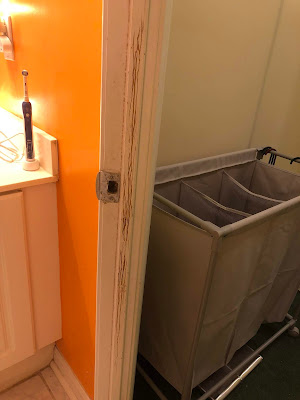 Here it is now. 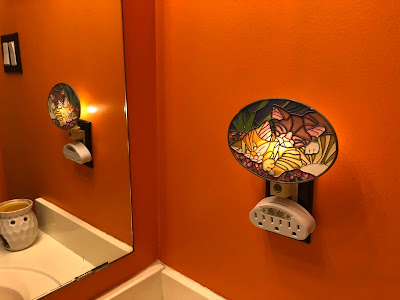 Here is a picture of the hallway and bathroom entrance before.  If you have cats, you know they don't like closed doors ... hence the ripped-up carpeting thanks to Byron and Morgan when we wouldn't let them in the bathroom with us.  It was like for more than ten years! 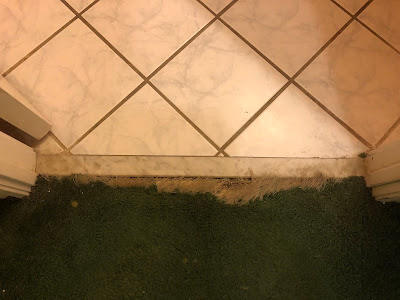 Here it is now! 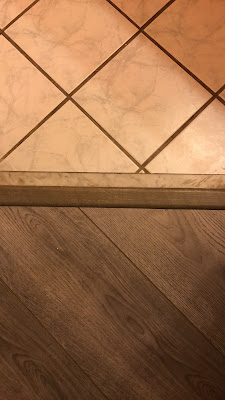 The gross carpeting throughout is gone and replaced by flooring. 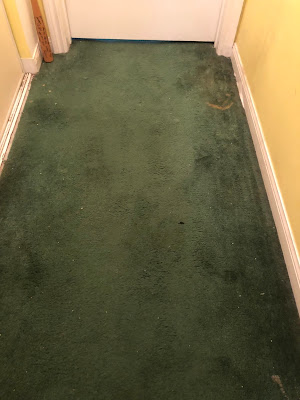 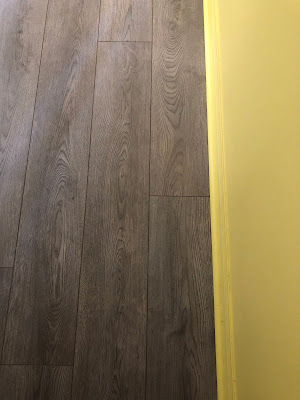 We got new knobs for the kitchen cupboards ... the old ones were nasty. 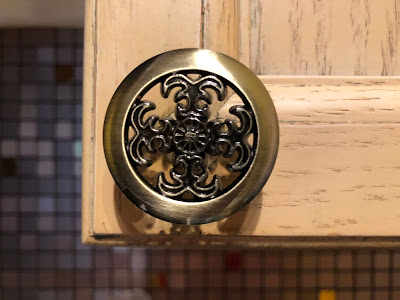 We replaced our wall plates with black ones (they were off-white). 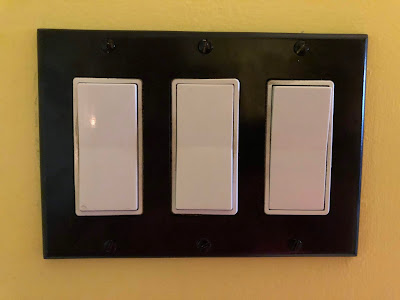 I went to IKEA on Saturday and bought a Poang chair and matching footstool.  There was a big exercise bike in that spot for years, which we never used.  Our intentions were good ... bike while we watch TV and we'd lose tons of weight ... but that never happened. 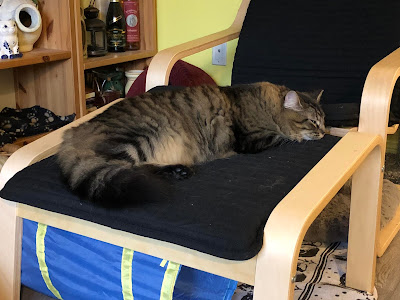 I also replaced our dining table and chairs that day.  Our was about 25 years old and had been water-damaged from a fire above us in 2002. 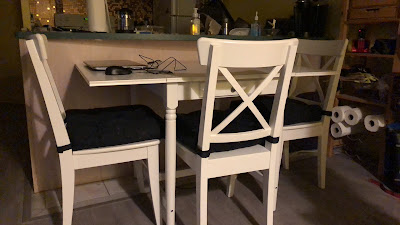 Gaetan replaced our bathroom faucet today ... I'm going to have him replace our kitchen faucet too. 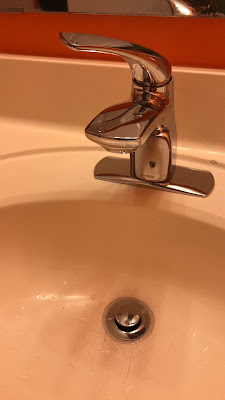 What is going to complete everything is a new couch.  I ordered one a couple weeks ago and it should be here mid-December.

And that should be it for anything major!
By Teena in Toronto at 7:27 pm
Email ThisBlogThis!Share to TwitterShare to FacebookShare to Pinterest

Must feel great to have it all done. Enjoy.

Looks great! You must feel like you are in a new place now!

Wowsa Teena. What an adventure. I’m excited to see it. We must come to visit as I’d love to check out the old hood. Monica (just realized this is my first comment in years)